What is really going on in Yemen? An expert point of view (PART TWO) 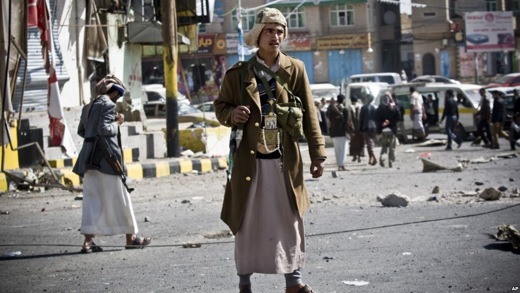 In light of recent developments in Yemen, Jafar Ghannad-Bashi, a Middle East expert, believes the country is highly likely to fall apart. Khabaronline’s Zohreh Norouzpour had an interview with Ghannad-Bashi on January 27, putting Yemen’s developments under the microscope. The following is PART TWO of the translation of the interview:

What consequences will the Persian Gulf Cooperation Council (PGCC) and the rulers of Arab nations face if Houthis take over in Yemen?

Four years ago when a revolutionary movement began to emerge in Yemen, the PGCC together with other Arab and Western nations scrambled to stop the revolution from securing its stated goal. Over the past four years, the PGCC did what it could to suppress the revolution. Through numerous military attacks, it inflicted big human and property losses on the Yemenis. They even dropped bombs on areas where elements of the Yemeni regime were present.

As a result of their measures the former vice-president remained at the helm of power. They also prevented the former authoritarian system from falling apart and managed to prevent the Yemeni revolution from emerging victorious. The Security Council’s statement confirming Mansour Hadi and provision of arms to people in the South are some other measures taken toward the same goal.

The PGCC did what it did to prevent the current situation in Yemen. They even prompted US warships to advance on Yemen. The PGCC has encouraged and financed the flight of US drones in the Yemeni airspace in recent days. It is quite natural if they carry on with their animosity in case a new government takes over in the country.

They seem to have reached the finish line after the experience which resulted from the actions of the Yemeni people and Ansarullah movement. They have to accept the realities of Yemen’s revolution, especially because those who support Ansarullah are cynical about Saudi Arabia, the US, and reactionary regional states.

In fact, Yemen is not the right place for them to be. The embassy closures in recent days are a sign of that. Whenever a threat looms in Sana’a, they think their diplomatic missions would be in jeopardy and their opponents may target their embassies which are the first sign of their presence in Yemen.

Given the four-year experience of Yemen’s revolution, the Arabs mobilized what they had against the people of Yemen, and now they have run out of arrows in their quiver to prevent the revolution from happening. They need to accept the realities. For the time being, the Arabs in the Persian Gulf concentrate their focus on disintegrating Yemen. They have already set the formation of South Yemen in motion, boosting the South to go to war with the North. PGCC members arm people in the South to later use them in order to seize Sana’a [in the North].

The Persian Gulf Arab states seek the disintegration of Yemen because they fear a Shiite government in Yemen may unite with Shiites in Saudi Arabia, something which may finally splinter the kingdom. Is that right?

It is not a matter of Shiites versus Sunnis. Saudi Arabia cannot bear to see a democracy thrive along its borders. Riyadh offered $16 billion in assistance to Egypt’s military men. Kuwait and the UAE, combined, sent around $32 billion to Egypt’s military only to undermine democracy in Egypt, because they didn’t want it to be an example for other Arab countries, especially in the Persian Gulf region and Saudi Arabia.

Iraq is a neighbor of Saudi Arabia. They did their utmost to block Iraq’s parliamentary election. They did not want a popular vote to be organized there. They even dragged ISIL to Iraq. In Bahrain, another neighbor, Saudi Arabia’s military presence is evident. Any model of democracy is viewed as a threat to Saudi Arabia and the Arabs.

The PGCC was formed exactly four months after the victory of the Islamic Revolution in Iran. Back then the council had a mission to counter democratic movements in order to prevent a revolution, like that of Iran, from taking place.

The question here is not one of Shiites versus Sunnis; it is all about a democratic system. The Shiites in Yemen and Saudi Arabia are not seeking to unite. Saudi Shiites have no intention of joining the Houthis and help disintegrate Yemen.

Houthis too are not trying to interfere in other countries. They have openly said they are willing to hold talks with all nations. Military support and Saudi meddling are all meant to facilitate Yemen’s disintegration. There’s no evidence that Saudi Shiites and Yemeni Shiites are making endeavors to disintegrate Saudi Arabia. The opposite is true; Al Saud is trying to make Yemeni disintegration a reality.

How would Shiites affect their country’s ties with Iran if they take over in Yemen?

What matters for Iran is not religion. The stance of Yemen is more important. Iran maintains close ties with the Venezuelan president who is not a Shiite or heads of other Latin American countries or other non-Muslim allies. These countries only share stance with Iran; they are against Israel and have been embraced by the current and previous governments in Tehran.

Iran’s ties with [former Venezuelan President Hugo] Chavez were established when [former President] Khatami was in office. The Yemeni people are bitterly opposed to Israel, arrogant powers and the US. They are against reactionary regional monarchies. Such attitude puts them on our side.

A country whose stance is similar to Iran is on our side; Lebanon, Syria and Iraq are among these countries. This is how the anti-Israeli front is boosted in the region. It is not the question of Shiites versus Sunnis. The stances matter more. Yemen’s previous government was unpopular and backed by the US and Britain and was a stooge of Saudi Arabia.

Abdullah Saleh’s government consisted of aristocrats who had forgotten about people and overlooked the economy. Iran cannot have a Yemen like that on its side. But a Yemen with a different attitude can be on Iran’s side.