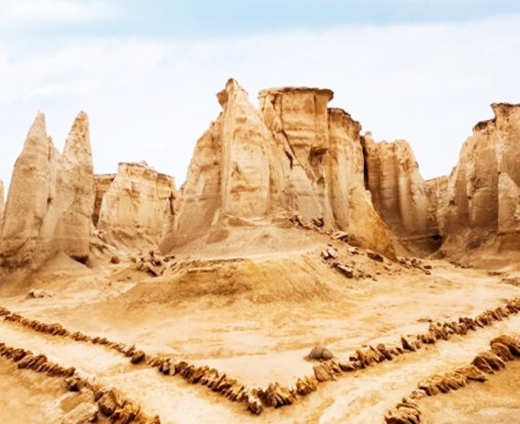 Qeshm Island is blessed with unique geological phenomenons, historical sites and local costumes- however the shortcomings decelerate its development.

Qeshm Island is a key destination in southern Iran, which draws tourists in droves every year.
Blessed with unique geological formations that host a variety of flora and fauna, and sandy beaches kissed by the pristine waters of the Persian Gulf, the island is brimming with opportunities squandered due to a host of factors, according to travel bloggers who recently visited the southern Iranian island.
A number of bloggers travelled to Qeshm for four days and wrote their experiences on their personal blogs, Donyaye-safar.com reported. Some had impressed the judges at a travel blogging competition organized by Qeshm tourism authorities two months ago.
They all wrote about the island’s attractions, but they also wrote extensively about its shortcomings.
“The island is pushing for industrialization while at the same time trying to preserve its traditions,” wrote Muhammad Gaeini, who regularly travels there. “But the two clash—a clear example of unsustainable development in Qeshm,” he added.  “Development or traditions – we can only choose one.”

Regaining Past Status
Qeshm was the Middle East’s first UNESCO-listed geopark, but lost its status a few years ago due to problems that have remained unresolved, such as underdeveloped infrastructure and unenforced environmental regulations.
Authorities are trying to bring the geopark back to global standards so it can regain its international status. However,“unrestrained construction of buildings,” threatens to undo efforts to put the geopark back on UNESCO’s radar. “Especially in areas whose geology is meant to remain untouched,” , Gaeini said.
Mehdi Goli, another blogger, says Qeshm “is an extraordinary place that revitalizes me every time I visit it”. He then conceded that a major problem of the island is the lack of developed public transportation system.
“Not everyone can afford to pay the cabs’ hourly rates,” he wrote. “If the public transportation network could extend to areas where the island’s attractions are located, Qeshm may very well become a top destination for everyone, including families.”
Qeshm authorities are aware that this glaring lack of infrastructure has overshadowed the island’s attractions. It pulls tourists away from beaches and wildlife habitats; and pushes them instead into malls and shopping centres. “Qeshm can only improve if it uses all it has to offer,” Goli added.
One of the island’s main attractions is its indigenous people and the vastly different lives they live, according to Mina Kamran. The villages, however, are so underdeveloped that travellers are deterred from visiting. “Qeshm’s villages have always fascinated me. It’s nothing like we know about rural life,” she wrote on her blog. “But the villages lack the most basic infrastructure, such as public rest rooms and diners.”

Help From JICA
Qeshm Free Zone Organization has enlisted the help of the Japan International Cooperation Agency. Its main goal is to develop the island’s travel sector in order to draw more tourists, especially foreign ones.
In June 2015, Hamid Reza Momeni, managing director of QFZO, and Kohei Sato, chief representative of JICA’s Iran office, signed an agreement in Tehran to launch a joint project aimed at turning Qeshm into an “eco island resort” by pursuing sustainable development. Based on the agreement, JICA will transfer its experience and knowledge to QFZO to help improve the quality of life of the locals and augment sustainability.
Last December, JICA launched an extensive study of four major investment areas in Qeshm. They include tourism, fishing, wastewater and solid waste management, with a special focus on environmental conservation.
Once successfully implemented, the JICA project is expected to increase household income through ecotourism. It will improve women’s social status through participation in economic activities. Also, the project is to reduce the environmental impact of tourism and curb the negative effects of industrial development and population growth in terms of solid waste and wastewater.
Established in 1974, JICA aims to contribute to the promotion of international cooperation and sound development of Japanese and global economy.  JICA tries to reach its goals by supporting the socioeconomic development, recovery or economic stability of underdeveloped regions.