Putin tells Biden sanctions could cause complete severance of ties 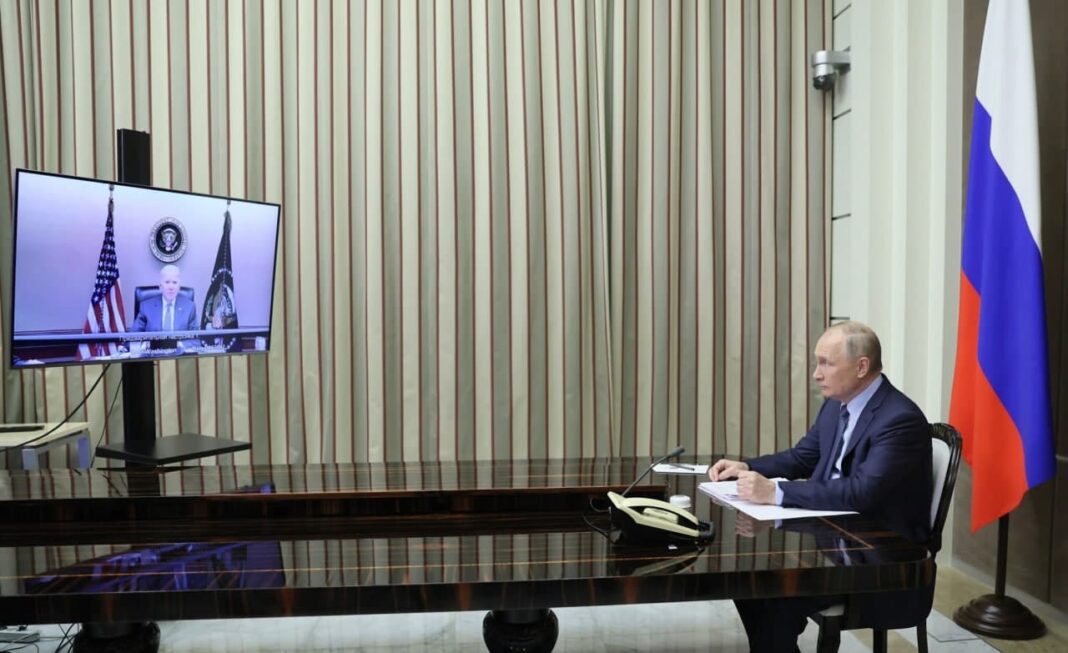 Russian President Vladimir Putin said during a call with his US counterpart Joe Biden that relations between the two countries could be severed completely in the event the threatened "unprecedented sanctions" become a reality, Kremlin Aide Yury Ushakov told reporters on Friday.

“Our president immediately responded to that by saying that if the West goes ahead to introduce abovementioned unprecedented sanctions, then all that could cause a total severance of relations between our countries and most serious damage will be done to Russia’s relations with the West in general,” the diplomat added.

Putin warned future generations will regard these moves as mistakes, the aide continued, noting, “There’s been a lot of these mistakes in past 30 years, and it’s preferable in this situation that they aren’t made any more.”

Ushakov made the comments when asked if Biden explained what kind of escalation on the Russian-Ukrainian border could set off the restrictions.

“That wasn’t discussed in detail,” he added.

Biden “mentioned massive sanctions” and Putin responded they would be a huge mistake that could cause a complete severance of relations.

Questions were asked to clarify what is meant by severance of relations with the West.

“It doesn’t mean anything because we don’t know what these massive sanctions are, but we know they would be a colossal mistake that could lead to most serious consequences,” Ushakov continued.

“We hope that won’t happen,” he stated, adding, “That’s why we, the Americans and other Western countries are starting a negotiating process along three tracks.”

Biden agreed when Putin said Russia was seeking results in the talks on security guarantees, the Kremlin aide added.

Putin told Biden about the principles that underlie Russia’s security proposals, the aide said. The president said talks were important but the key goal for Russia was its security and the country will seek to achieve that goal, Ushakov added.

“The US president has generally agreed with that point of view and his reaction made sense and was quite serious,” the aide underscored.

Putin elaborated on the subject to drive the point home, Ushakov stated.

On December 17, the Russian Foreign Ministry released draft agreements on security guarantees addressed to the US and NATO. They had been handed over to a US representative on December 15.

White House Press Secretary Jen Psaki announced in a statement on Thursday Biden in the call with Putin said Washington and its allies were ready to respond strongly if Russia “invades Ukraine”.

“President Biden urged Russia to de-escalate tensions with Ukraine,” the statement said, adding, “He made clear that the United States and its allies and partners will respond decisively if Russia further invades Ukraine.”

This was the second time this month that the presidents held talks. The previous conversation took place by video link on December 7, with topics including Ukraine, bilateral relations, cybersecurity and Iran’s nuclear deal.

The latest talks were requested by Putin. The aim was to continue discussions started during the previous talks and to discuss the negotiations scheduled for January, Kremlin Spokesman Dmitry Peskov stated.

There has been a flurry of statements in the West and Kiev lately that Russia could invade Ukraine. Peskov noted they were unsubstantiated escalation and that Russia doesn’t threaten anyone. At the same time, he didn’t rule out provocations to corroborate these Western statements and warned that the use of force to resolve the crisis in southeastern Ukraine will have serious consequences.

“The key point that was voiced by the American side during the call was that President Biden clearly stated that the US doesn’t plan to deploy offensive weapons in Ukraine,” Ushakov said.

Putin noted that was one of the key points in the proposals that Russia handed over to the US, which we want to hold substantive talks about in future, the Kremlin aide added.

Russia expels top US diplomat in Moscow amid Ukraine crisis