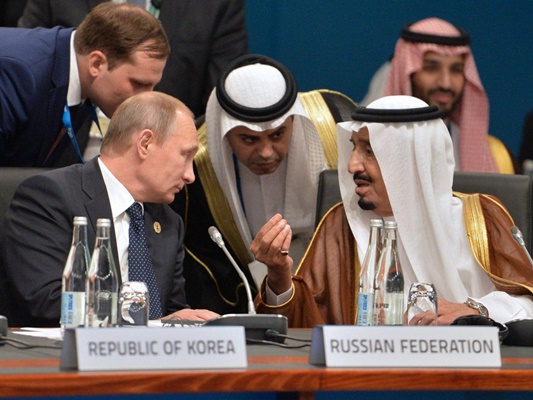 Political analyst Rahim Nemati has, in a short article published in the Persian-language Javan daily, weighed in on Saudi King Salman bin Abdulaziz’s trip to Russia, the first trip by a Saudi monarch to Russia in nine decades. The analyst says during the visit, Putin has refrained from making a deal with the Saudi King over Iran despite his insistence.

In his article, Nemati refers to the agreements reached by the two sides at the meeting, including the continuation of oil cooperation between the two countries, construction of companies manufacturing weapons and Kalashnikov ammunition, the setting up of an investment fund worth $1 billion to implement Russia’s economic projects, the conclusion of a preliminary agreement on the purchase of S-400 systems and signing a deal on space cooperation.

In return for giving all the economic concessions to Putin and confirming his special status, King Salman had a demand as well. He demanded that Russia puts pressure on Iran to, as he put it, “stop the country from meddling in Arab countries’ internal affairs.”

Over the past few years, Saudi authorities have regularly made this claim. In fact, Saudi officials take every opportunity, from interviews with reporters to official forums, to repeat such allegations. When meeting Putin, the Saudi King took the chance to repeat his demand, but did not know that Iran is something that Putin would not make deals on.

If he had remembered Netanyahu’s trip almost a month earlier, he would have realized that he shouldn’t have made such a demand because the Israeli prime minister made the same demand during his trip, but did not receive a positive answer from Putin and returned to Tel Aviv with frustration.