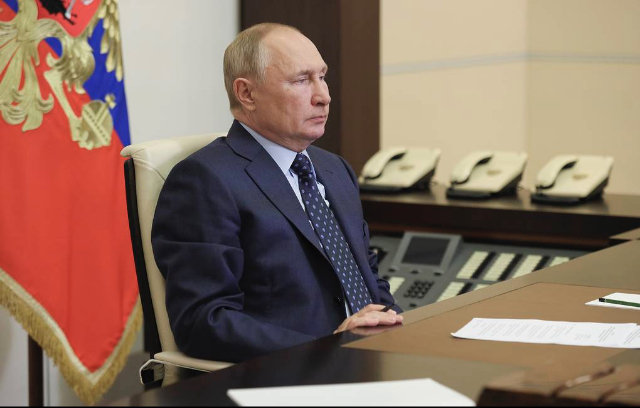 Russian President Vladimir Putin says interaction should be maintained with the Taliban, but there should be no haste to recognize the new rulers of Afghanistan officially.

“There should be no haste to recognize the Taliban officially. We are aware that they should be cooperated with, but there is no place for haste,” Putin stated at the CIS summit on Friday.

He added that Moscow was going to discuss these questions with its CIS counterparts.

The Russian leader also believes that it is necessary to support the process of intra-Afghan reconciliation and promote normalization in the country.

The leaders of terrorist organizations who are building up forces near Afghanistan’s borders with the CIS countries are hatching plots for expanding their influence, Putin said.

“Terrorists have been trying to get into the CIS territory in different disguises, often trying to pass for refugees,” Putin added.

“The situation in Afghanistan causes concern, of course. It is fraught with risks for Central Asia and the whole of the CIS space, even though some countries are far away from this region,” he pointed out.

The Taliban previously combated drugs in Afghanistan but it will be difficult for them to give up this revenue source in the current environment, the Russian president stated.

“Despite promises to combat the production of drugs, in reality I do not know whether the Taliban manages to do so, whether they want to deal with that or not,” the Russian leader said, adding, “They did so, and performed successfully” during their prior reign in Afghanistan.

“It will be challenging at present to drop such a source of revenue, especially in the crisis in the Afghan economy,” Putin stressed.

The problem of drug production in Afghanistan and smuggling from the country is acute, Putin noted. “Afghanistan remains the largest supplier of opiates globally, up to 90% of the worldwide market volume,” he continued.

Kremlin Spokesman Dmitry Peskov said on Friday Putin is not planning to meet with the Taliban who is expected to arrive in Moscow in October for consultations.

When asked if a meeting between Putin and Taliban representatives was being planned, the Russian presidential spokesman replied “No.”

Russian Foreign Ministry Spokeswoman Maria Zakharova earlier noted that Moscow was expecting the arrival of a large Taliban delegation for consultations on Afghanistan next week. Peskov has also confirmed that preparations for contacts on Afghanistan were underway.

The Moscow format meeting is scheduled for October 20. This platform emerged in 2017 on the basis of a six-party mechanism of consultations by special envoys from Russia, Afghanistan, India, Iran, China, and Pakistan.

The Taliban has also confirmed participation in Moscow consultations on Afghanistan.

A senior delegation of the Islamic Emirate of Afghanistan will pay an official visit to Moscow at the invitation of the Russian leadership, Taliban spokesman Wardak al-Hanafi tweeted on Friday.

A US delegation has been invited to join the Moscow talks on Afghanistan, Russian Special Presidential Envoy for Afghanistan and Director of the Foreign Ministry’s Second Asian Department Zamir Kabulov reported on Friday.

US State Department Spokesman Ned Price said at a regular briefing for journalists on Friday the United States cannot yet confirm its participation in the Moscow-format consultation on Afghanistan.

According to him, Washington is aware of the upcoming session in Moscow yet cannot yet confirm any meetings or its participation.

The spokesman noted that the US considers the extended Troika format (Russia, the US, China, Pakistan) on the peaceful settlement in Afghanistan useful and coordinates interests with such countries as Russia on these issues.