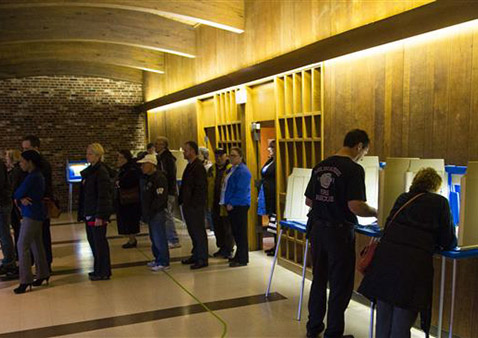 American voters are heading to polling stations to choose between two starkly different candidates, Republican Donald Trump and Democrat Hillary Clinton, in one of the most divisive presidential races in US history.

Of the nearly 230 million Americans eligible to vote, more than 120 million are expected to partake in the polls. More than 41 million Americans have already voted in 37 states and the District of Columbia, where some forms of early voting were offered. Opinion polls suggest Clinton has a slight edge.

– Trump on Tuesday morning dismissed polls which are showing a tight race on Election Day with Clinton.

“I do think a lot of the polls are purposely wrong,” he told Fox News. The billionaire businessman predicted victories in the key battleground states of Iowa and New Hampshire.

– Clinton and her husband, former President Bill Clinton, voted in Chappaqua, New York.  She was greeted by dozens of supporters.

“I know how much responsibility goes with this and so many people are counting on the outcome of this election, what it means for our country and will do the very best if I am fortunate enough to win today,” Clinton told a CNN reporter.

Other states are due to begin the process within hours. Timings vary for each state.