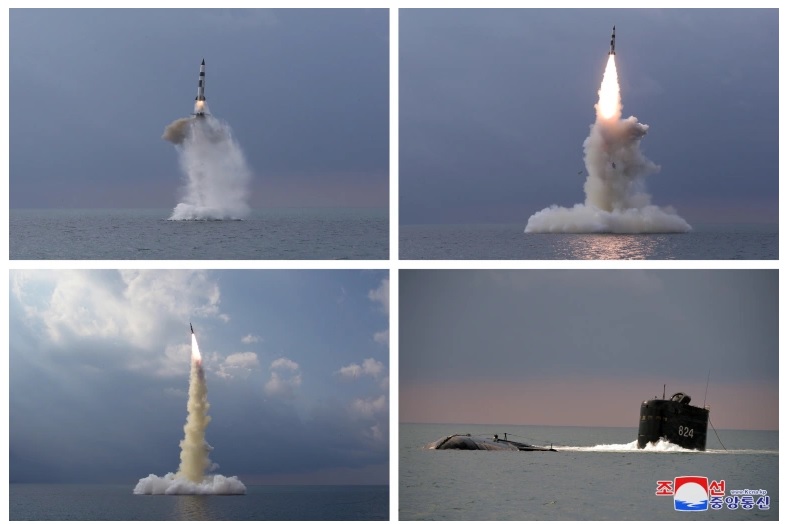 North Korea has confirmed it tested a new submarine-launched ballistic missile (SLBM) on Tuesday. The fire became Pyongyang’s first of its kind since 2019, prompting international outrage.

North Korea has confirmed it test-fired a new SLBM, a day after South Korea reported the launch of what it said appeared to be an SLBM from North Korea’s east coast.

State media reported on Wednesday a “new type” of SLBM had been launched, and released a series of photos.

The device had “lots of advanced control guidance technologies”, North Korea’s state news agency Korean Central News Agency (KCNA) said, adding that it was fired from the same vessel that the North used in its first SLBM test five years ago.

The report did not mention leader Kim Jong Un, suggesting he did not watch the test.

The launch, near the city of Sinpo, where Pyongyang has a major shipyard building submarines, is the fifth since September, the eighth this year, and the first test of an SLBM since 2019. The North is banned from missile tests under United Nations sanctions.

The UN Security Council will hold an emergency closed-door meeting on North Korea on Wednesday at the request of the United States and the United Kingdom.

Pyongyang has been gradually improving its military arsenal since talks on denuclearisation broke down in 2019 following the collapse of the Hanoi summit between Kim and then US President Donald Trump.

Kim has accused the US and South Korea of maintaining a “hostile policy” towards the North, insisting that his country’s military development is crucial for “self-defence”.

The White House reviewed North Korean policy after Joe Biden took office in January and has been urging Pyongyang to return to the negotiating table – key envoys from the US and South Korea met in Washington, DC this week as the test was detected and Sung Kim, Biden’s special envoy on North Korea, is due to travel to Seoul to discuss the possibility of reviving diplomacy with Pyongyang.

On Tuesday, the US again stressed it remained open to diplomatic engagement with Pyongyang, but urged North Korea to refrain from further “provocations”.

Talks have faltered over the North’s demands for sanctions relief, and on Wednesday South Korean Foreign Minister Chung Eui-yong called on Washington to ease sanctions if the North returned to talks.

“Action must be taken as soon as possible to stop North Korea from further developing nuclear and missile capability,” he told parliament, noting, “I think considering relaxing sanctions can surely be an option.”

Robert Kelly, professor of political science at Pusan National University in South Korea, told Al Jazeera the tests were probably a sign that the North was looking for more from the US and not just in terms of sanctions relief.

“Maybe it went to their head a little that Donald Trump personally met the North Korean leader three times and now North Korea feels they’re entitled to some presidential attention and that Joe Biden himself should be somehow involved,” he stated, adding that “this is one of the reasons why US presidents had not met the North Koreans before, but I think this is what the North Koreans want. They want more than envoys, secretaries and spokesmen”.

The photos of the test published by KCNA appeared to show a missile that was thinner and smaller than previous SLBM designs, with analysts speculating it could be a previously unseen model that was first showcased at a defence exhibition in Pyongyang last week.

A smaller SLBM could allow more missiles – albeit at a shorter range – to be stored on a single submarine, potentially moving the North closer to fielding an operational ballistic missile submarine (SSB).

But analysts announced the development was likely to have only a limited effect until the country made more progress on a larger submarine that has been seen under construction.

“It’s an interesting development but with only one submarine in the water that can launch notionally one or two of these it doesn’t change much,” Schmerler added.

“[The SLBM] will greatly contribute to putting the defence technology of the country on a high level and to enhancing the underwater operational capability of our navy,” it added.

Schmerler said it was unclear exactly what KCNA meant by “flank mobility”, but “glide skip” was a way to change a missile’s trajectory to make it harder to track and intercept.

The North last tested an SLBM in October 2019.

In a report this month on the country’s military capabilities, the US government’s Defense Intelligence Agency said the North’s pursuit of submarine-launched ballistic missile capabilities along with its steady development of land-based mobile long-range weapons highlighted Pyongyang’s intention to “build a survivable, reliable nuclear delivery capability”.