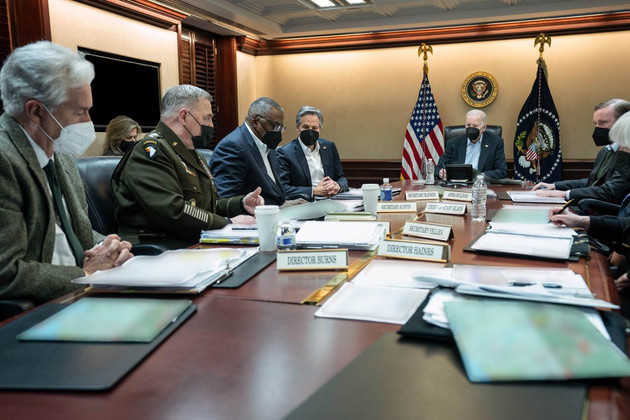 The US has intelligence indicating orders have been sent to Russian commanders to proceed with an attack on Ukraine, according to two US officials and another source familiar with the US intelligence. Moscow denies any such plan.

The intelligence regarding the order to tactical commanders and intelligence operatives is one of several indicators the US is watching to assess if Russian preparations have entered their final stages for a potential invasion.

Other indicators, such as electronic jamming and widespread cyber-attacks, have not yet been observed, according to some of the sources. The sources cautioned that orders can always be withdrawn or that it could be misinformation meant to confuse and mislead the US and allies.

But the news of the intelligence comes after President Joe Biden noted on Friday that he believes President Vladimir Putin has made a decision to invade — a comment echoed by Vice President Kamala Harris and by Secretary of State Antony Blinken on Sunday.

“We believe President Putin has made the decision,” Blinken stated Sunday in an interview on CNN.

“But until the tanks are actually rolling and the planes are flying, we will use every opportunity and every minute we have to see if diplomacy can still dissuade President Putin from carrying this forward,” he added.

New satellite imagery shows intensified activity among Russian units close to Ukraine’s northeastern border, with units that were in garrisons appearing to take up field positions. The satellite images were collected by Maxar on Sunday.

According to the latest US intelligence assessment, Russia now has close to 75% of its conventional forces postured against Ukraine, a US official with direct knowledge of the intelligence told CNN.

The concentration of forces within striking distance of Ukraine is highly unusual and part of the reason the US believes Russia is ready to attack, the official claimed.

This includes some 120 of Russia’s total estimated 160 Battalion Tactical Groups or BTGs which are positioned within 60km of Ukraine, according to the official. While that figure represents 75% of Russia’s principal combat units, it is less than half of the total troops in the Russian military.

US officials have reported that Russian troops combined with separatist forces could be as high as 190,000 deployed around Ukraine.

Some 35 of 50 known air defense battalions are deployed against Ukraine. In addition, the US estimates some 500 fighter and fighter-bomber aircraft are within range of Ukraine, as well as 50 medium to heavy bombers.

Together, the Russian forces now vastly outnumber Ukrainian military forces, according to the assessment.

The White House has announced that Biden has agreed “in principle” to a meeting with Putin, as long as Russia does not further invade Ukraine. The potential Biden-Putin summit was proposed by French President Emmanuel Macron.

There has been a flurry of statements in the West and Kiev lately that Russia could invade Ukraine. Kremlin Spokesman Dmitry Peskov stressed they were unsubstantiated escalation and that Russia doesn’t threaten anyone. At the same time, he didn’t rule out provocations to corroborate these Western statements and warned that the use of force to resolve the crisis in southeastern Ukraine will have serious consequences.