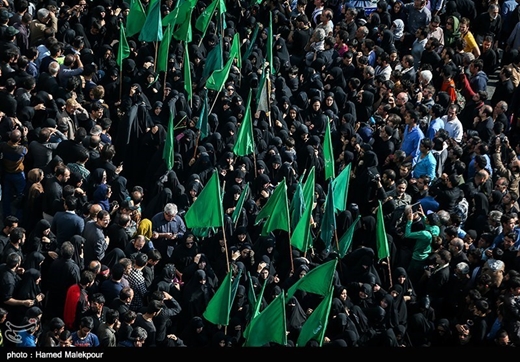 With heavy hearts, the faithful have come out in their millions across Iran as well as elsewhere in the world to commemorate the anniversary of the martyrdom of Imam Hussein, the grandson of Prophet Muhammad and third Shia Imam.

Muslims worldwide hold mourning rituals during the month of Muharram on the lunar calendar in remembrance of the suffering imposed on the religious icon, his family and his companions, by the tyrant of the time Yazid I, an Umayyad caliph, back in the seventh century.

The events peak on the10th day, traditionally known as Ashura, when the Imam and 72 of his companions were martyred at the hands of the despot, to whom they had refused to pledge allegiance.

This year’s Ashura fell on Saturday when, in line with centuries-old customs, benefactors distributed votive food, while others marched in massive mourning processions, lamenting the tragedy.

Mourning processions are also underway in Pakistan, the Republic of Azerbaijan, Lebanon and Australia. Similar ceremonies will also be held in Europe, America and Africa later in the day.

In Sydney, more than 5,000 people took to the streets to observe Ashura, chanting slogans in honor of Imam Hussein and his family’s sacrifices.