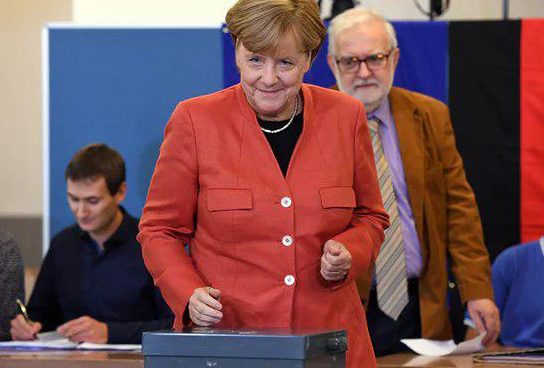 Incumbent German Chancellor Angela Merkel has won a fourth term in office after her centre right CDU/CSU won a projected 33% of the vote in federal elections.

Merkel’s party won the majority of votes and became the largest party in the Bundestag with an estimated 218 seats. However, the Party’s score, sharply down on the 41% of the vote it collected in the previous 2013 elections, was widely seen as disappointing and is likely to leave Merkel diminished on the domestic political stage.

Merkel’s main rivals (and outgoing coalition partners), Martin Schulz’s Social Democrat SPD, crashed to just over 20% and a projected 138 seats. Within an hour of the first exit poll, Schulz confirmed statements by other senior party figures that the SPD would not renew its “grand coalition” with the CDU but head into opposition.

The far-right, anti-immigration AfD made a historic breakthrough, winning 13.5% of the vote and a projected 87 seats and becoming the first overtly nationalist party to sit in the Bundestag in 60 years. The party’s performance marks a major shift in Germany’s postwar politics that is likely to produce a very different tone and dynamic inside the Bundestag.

The SPD’s decision to become the official parliamentary opposition leaves the only feasible coalition for Merkel a three-party tie up between the CDU/CSU, the pro-business FDP party who scored 10%, and the Greens, who won 9%: the so-called black-yellow-green Jamaica coalition, which has worked at state level but never been tried in federal government. This could prove tricky to negotiate, The Guardian reported.

Merkel said in her post-election speech that the CDU had hoped for a better result but had faced – referring to the 2015 migrant crisis – an “extraordinary challenge” and had still managed to remain Germany’s largest party. She pledged to listen to AfD voters and win back those she could with “good politics”.

The AfD promised “constructive opposition” in parliament but the Greens have already complained that “Nazis have returned to parliament”.