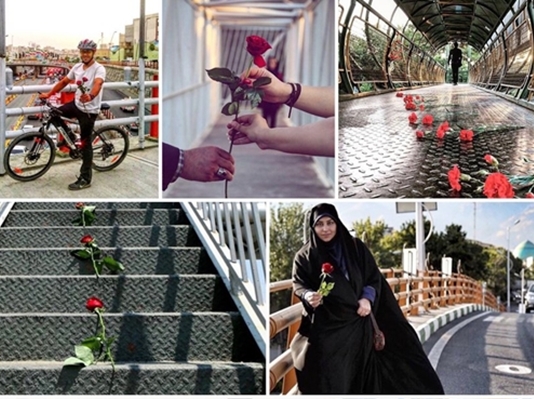 Suicide has become a new concern in many modern cities, as more people are resorting to killing themselves to end the misery of their lives. Psychologists and sociologists look at suicide from different angles, but none deny the costs it imposes on the mental and psychological security of city-dwellers.

Unlike most urbanites, who merely feel grief and sorrow when seeing the scene of a suicide, a number of photo-journalists from the capital city of Tehran have launched an anti-suicide campaign entitled Ba Omid be Khoda Khodkoshi Mamnou (roughly meaning: With Hope in God, Preventing Suicide), and have initiated the “photography-on-a-footbridge-with-a-flower” challenge.

The campaign started two weeks ago when the organizers published a video clip on Instagram with a comment that read: “People have overlooked footbridges, even those equipped with escalators, for the past few years. Now, however, the structures are gaining publicity; they are no longer disused, but are being used as jumping-off spots for you! Your death is suicide and is tantamount to the death of all of us. Dear fellow citizens! Trust in God, so we can move beyond despair and build a bridge to life. We shall shout: Viva Life!”

The campaigners call on their fellow photographers to take pictures of flowers on footbridges for five days and share them on their Instagram pages.

“We are not taken in by fantasy,” says Mojtaba Heidari, freelance photographer and one of the founding members of the campaign. “We are well aware that taking pictures with a flower cannot be a cure-all for all the economic, mental, and psychological troubles of the victims. We are not also speaking down from positions of luxury – everybody knows how photographers live in this country and how little they make. So it is all about carrying out our social responsibility toward our fellow citizens.”

Regarding the campaign’s original philosophy, Heidari said, “This is a symbolic move. We want to tell the potential victims that their lives and their happiness are important to other citizens. We believe that the death of an Iranian citizen is the death of all other Iranians, and the same goes for saving the life of a fellow citizen. The founders of this campaign agree on an important notion: aside from recognizing all the economic, social and cultural problems that lead people to end their lives, we maintain that a lack of belief in God and losing hope in his support are the prime reasons for one to kill themselves, not only in Tehran, but in all other major cities in the world.”

He said social and economic shortcomings will not be resolved overnight and such difficulties have always been and will be the case [in society]. “We believe that the only thing that can help people entrapped in the modern world’s hardships is trust in God and his support. This is the only factor that can uplift a negative life. We want to remind the potential victims to trust in God and hope for his support.

The social photographer also said, “The campaign has sparked so much interest among professional and amateur photographers. All citizens may join the campaign with their mobile phones, a flower and a pinch of creativity, then share their photos on social media.”

Heidari further said that a collection of the best photos will be released as a photo report by various news agencies across the country. In further steps, the pictures will be put on display in a gallery in the future.