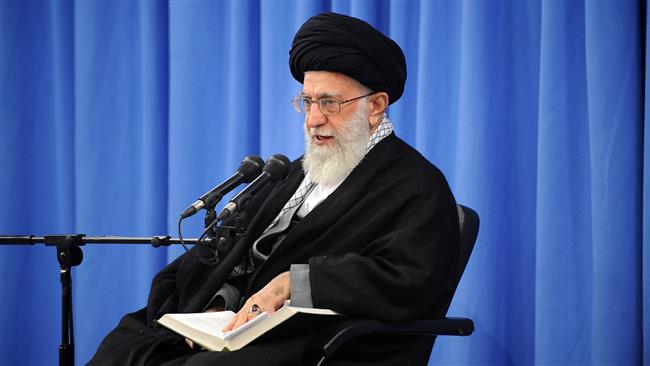 The Supreme Leader has slammed the silence of those who claim to be advocates of freedom, democracy and human rights, and their support for the Saudi regime which is killing innocent people.

Ayatollah Khamenei made the remarks on Sunday, stressing the need for the entire world to act responsibly in the face of this and other crimes committed by the Saudi regime in Yemen and Bahrain.

“Without a doubt, the unlawfully spilled blood of this innocent martyr will have a rapid effect and the divine vengeance will befall Saudi politicians,” the Leader added.

Describing the execution of Sheikh Nimr as a “political mistake” made by the Saudi government, Ayatollah Khamenei emphasized that “the Almighty God will not remain indifferent to innocent blood and [this] unrightfully spilled blood will rapidly afflict the politicians and executives of the [Saudi] regime.”

The Leader also slammed the silence of those who claim to be advocates of freedom, democracy and human rights, and their support for the Saudi regime which is killing innocent people just for criticizing them.

“The Muslim world and the whole world must feel responsibility toward this issue,” Ayatollah Khamenei said.

Ayatollah Khamenei added that the top Shiite cleric neither invited people to take up arms, nor hatched covert plots, but “the only thing he did was public criticism, [as well as] ordering good and prohibiting vice, which stemmed from [his] religious zest and fervor.”

The Supreme Leader also noted that torturing the Bahraini people and destruction of their mosques and homes in addition to the bombardment of the Yemeni people for over 10 months were other instances of crimes committed by the Saudi regime.

Ayatollah Khamenei emphasized that “those who are honestly interested in the fate of humanity, [and] the fate of human rights and justice, must follow up on such issues and should not remain indifferent to this situation.”