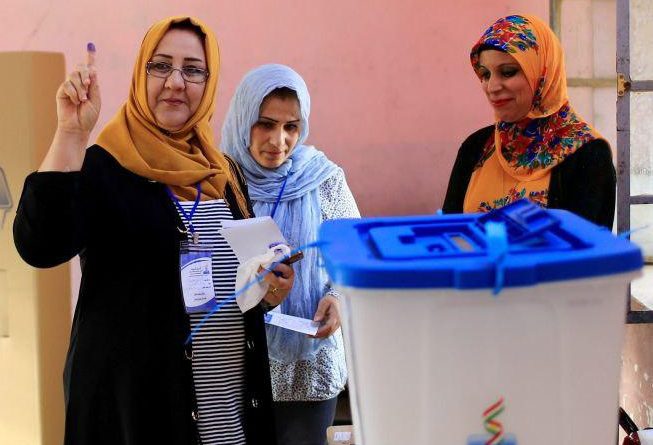 Since Monday morning, the Iraqi Kurds have started casting their votes for or against the Iraqi Kurdistan region’s independence amid domestic and international opposition to the referendum.

The referendum has begun as the Iraqi government asked the autonomous Kurdish region to hand over control of its international border posts, its international airports and called on foreign countries to stop importing Kurdish crude oil.

“To take a unilateral decision affecting the unity of Iraq and its security, and the security of the region, with a referendum on separation is unconstitutional and against civil peace,” al-Abadi said on Sunday.

“We will take the necessary measures to preserve the unity of the country,” he said, without specifying what action his government might take. “We won’t engage with the referendum or its results.”

Abadi had warned earlier of military intervention if the referendum led to violence.

He also said the poll remains “unconstitutional”, reiterating that Baghdad “will not recognize its outcome”.

“We will never forsake our Kurdish citizens, their security and welfare. We reject the sectarian, racist state,” Abadi said, alluding to the independent state sought by the Kurds.

He said leaderships had the duty of “protecting civilians from surrounding dangers rather than endangering them and implicating them in useless conflicts,” in an obvious repetition of his earlier warning that the vote could spark a civil war.

Abadi also accused Kurdistan government of corruption as for its handling of oil production at areas under its control. Oil revenue sharing had been a central issue of dispute between Baghdad and Erbil.

Barzani, meanwhile, said in a concurrent press conference that Kurdistan was going ahead with the referendum, adding that “partnership with Iraq is over”.

“It was Baghdad that had declined to accept us,” Barzani said, adding that his government had sought to resolve issues of dispute with Baghdad through the international community.

He, however, said Erbil would engage in “open negotiations” with Baghdad after the referendum, adding that security cooperation would continue regarding the war against Islamic State militants.

“We will not allow a war to break out among Arabs, Kurds and Turkmen,” Barzani stated.

Kurdistan predicts 900,000 to vote in the poll rejected by the United States, the European Union, the United Nations and regional powers Turkey and Iran.

The Turkish Foreign Ministry said it did not recognize the referendum and would view its outcome regarding a future Kurdistan as null and void, adding that the Iraqi Kurdish government was threatening the peace and stability of Iraq and the whole region.

Iran also warned the Kurdistan Regional Government (KRG) against holding the referendum, and said it would stop its cooperation and close its borders with the autonomous region.

Iran and Turkey both closed their airspace to the Iraqi Kurdistan on Sunday at the request of Baghdad.