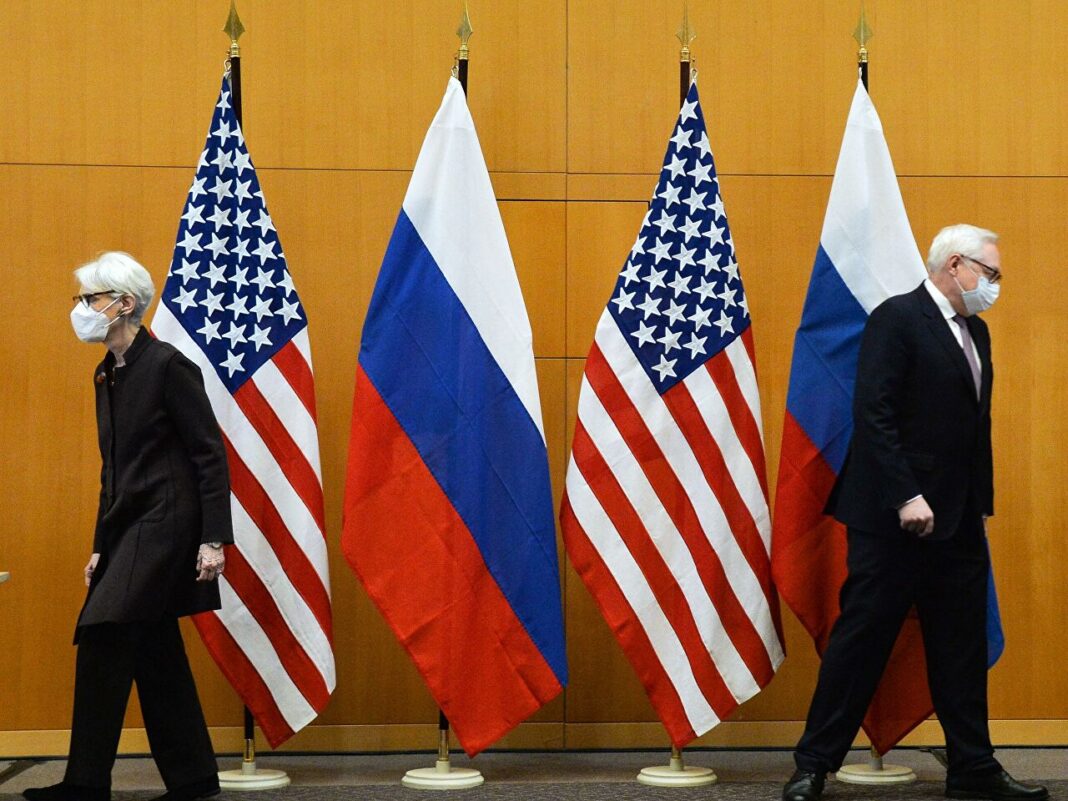 The Kremlin spokesperson says Moscow was not optimistic after a first round of talks with the United States on the Ukraine crisis. Dmitry Peskov added Russia would not allow its demands for security guarantees from the west to become mired in tortuous negotiations.

Kremlin spokesman Dmitry Peskov stated on Tuesday it was positive that Monday’s talks in Geneva had been held in an open, substantive and direct manner, but Russia was interested only in results.

“There are no clear deadlines here, no one is setting them – there is just the Russian position that we will not be satisfied with the endless dragging out of this process,” he continued.

Russian and the US negotiators gave no sign of narrowing their differences in briefings after the first session in Geneva.

Peskov noted the situation would be clearer after two further rounds of talks that Russia is due to hold this week – with NATO in Brussels on Wednesday and at the Organisation for Security and Cooperation in Europe (OSCE) in Vienna on Thursday.

During an interview with the Soloviev Live YouTube channel on Tuesday, Russian Foreign Ministry Spokeswoman Maria Zakharova took White House Press Secretary Jen Psaki to task over her remarks that Russia would spread disinformation over the Geneva talks.

“What you are talking about is no longer a matter of bewilderment but of deep pity. After all, this is a great nation, a great country. And when left to the mercy of people who do not have a good grasp of the subject matter and do not feel responsible for the words they utter, this evokes deep pity,” the diplomat insisted.

“Let’s presume that we heard yesterday’s statement made by their negotiators, and we heard the expert statements yesterday. In some ways, they were the same as ours, in other ways we had different assessments. I would still keep those statements in mind. By those people who were present at the negotiations,” the spokeswoman noted.

Following the most recent talks, Psaki stated that the US was bracing for Russia to spread disinformation about commitments related to the bilateral consultations in Geneva on security guarantees.

Russia’s Deputy Foreign Minister Sergey Ryabkov warned his American counterparts that some form of military response to the US stationing advanced weapons in Europe could be possible in the future. Moscow and Washington gave no sign that they had narrowed their differences on Ukraine and wider European security in talks in Geneva, Switzerland, which lasted for more than 7.5 hours.

He insisted that if NATO proceeds toward the deployment of new capabilities in weaponry, “which are being developed very rapidly in the US”, the Russian military may reply in a way that “will inevitably and unavoidably damage the security of the US and its European allies”.

Speaking to the media after a day of crucial US-Russian negotiations on security guarantees in Geneva, Ryabkov also said that there has been no progress so far on Russia’s proposals to curb NATO expansion. He added that the ball is now in NATO’s court, which, in his words, has to finally make a “real step” toward finding common ground with Russia.

“We are calling on the US to demonstrate a maximum of responsibility at this moment. Risks related to a possible increase of confrontation shouldn’t be underestimated,” Ryabkov said, adding that “significant” effort has been made to persuade the Americans that “playing with fire” is not in their interests.

Following discussions on Monday in Switzerland over the future of European security, the Russia’s chief negotiator has warned that his American counterparts “underestimate the gravity of the situation”.

While the US delegation came to Geneva for “serious” discussions on Moscow’s European security proposals, they failed to show an understanding of how key issues need to be resolved, Ryabkov claimed.

Russia laid all of its cards on the table in proposals made public last month, Ryabkov insisted, and those represent “demands that we cannot retreat from”.

The diplomat described the Geneva talks as useful because they discussed matters previously considered off the table, and noted he did not think the situation was hopeless. The greatest difference of views between the US and Russia was on the further expansion of Washington’s NATO military bloc.

“Unfortunately we have a great disparity in our principled approaches to this. The US and Russia in some ways have opposite views on what needs to be done,” the deputy FM told reporters.

“For us, it’s absolutely mandatory to make sure that Ukraine never ever becomes a member of NATO,” Ryabkov said, and Moscow is insisting that the institution amend its policies to reflect this reality.

“We are fed up with loose talk, half-promises, misinterpretations of what happened in different negotiations behind closed doors,” he added, referring to the State Department’s claims in recent days that NATO and the US never promised Moscow that NATO would not expand to the east.

“We do not trust the other side, so to speak,” Ryabkov said, adding, “It’s over, enough is enough.”

Following Monday’s talks in Geneva, Ryabkov will meet with NATO representatives on Wednesday, and with the OSCE on January 13, after which Moscow will make a decision whether to continue the negotiations further.

US Deputy Secretary of State Wendy Sherman has told reporters that Russia’s proposed limit on the expansion of NATO further into Eastern Europe is a “non-starter”. However, she said that progress in talks with Moscow is possible.

Sherman on Monday met with Ryabkov in Geneva. Called to discuss a series of security proposals offered to the US and NATO by Moscow, the Cold War-style meeting lasted more than seven hours.

Afterwards, Sherman told reporters that the pair found some room for progress. She added that US officials are “open to discussing” the size and scope of NATO military exercises in Europe “on a reciprocal basis”, and suggested that the US could alter its placement of missiles in Europe to better accommodate Russian security concerns.

Both sides remain deadlocked, however, on one of the most crucial of Moscow’s demands: that NATO cease taking in new members from the former Warsaw Pact states. Sherman called this idea a “non-starter”, saying that the US “will not allow anyone to slam closed the door to NATO membership to anyone”.

Declassified documents have previously revealed that during the dying days of the USSR, Western leaders promised their Soviet counterparts that NATO would not expand into Eastern and Central Europe. However, the US’ current position is that no such promise was ever made, and that NATO’s membership books must remain open – even for states bordering Russia.

At the core of the dispute is Ukraine. Pro-Western factions in Ukraine aspire to join the military alliance, a move that would put Western troops and arms on Russia’s border. Moscow considers such a situation unacceptable, but NATO leaders insist that Ukraine needs protection from a potential invasion by Russia, something that Moscow has repeatedly dismissed as “hysteria”.

Sherman noted that no decision on issues affecting Ukraine would be made without Ukrainian involvement, and stated that talks aimed at resolving the crisis would continue.

However, she described the overall tone of Monday’s meeting as “frank and constructive”, and stated that herself and Ryabkov would continue to find common ground on arms control issues. This statement echoes Secretary of State Antony Blinken’s comments to US cable news networks on Sunday, in which he suggested that the current talks could possibly revive the Intermediate Nuclear Forces Treaty, a Cold War agreement that banned the deployment of medium-range nuclear missiles in Europe by either the US or Russia. Under President Donald Trump, the US pulled out of the treaty in 2019. However, Moscow insisted that any such possibilities rely fully on whether Russia’s main demand about the expansion of NATO is heard.

Preventing nuclear war is something both sides can easily agree on.

Sherman said that herself and Ryabkov reiterated a promise signed in writing last week by the US, Russia, and the world’s other nuclear powers that “a nuclear war can never be won and must never be fought”.

Resolving the crisis in Ukraine is a different matter.

After the meeting, Sherman insisted that Russia must pull back any troops stationed near Ukraine’s border, even though they may be on Russian soil.
“It is on Russia to de-escalate tensions”, she told reporters.

However, talk of military solutions to the standoff have come from both sides, with NATO Secretary General Jens Stoltenberg openly suggesting that the West may take military action if talks fail.

“We have significant capabilities,” he stated on Friday, adding, “We have troops, we have forces. We have the readiness. We have the plans to be able to defend, protect all allies … to make sure that we preserve peace in Europe.”

The US State Department has said the US and Russia have a better understanding of each other’s concerns following a meeting between the two sides in the Swiss city of Geneva, but again threatened Moscow with “financial sanctions” and other “costs” if it launches any military action in neighboring Ukraine.

“If Russia stays at the table and takes concrete steps to deescalate tensions, we believe we can achieve progress,” stated Sherman, the number two diplomat in the State Department.

She reiterated potential actions that Washington and its allies are prepared to take if Russia launches an invasion, despite the fact that Moscow has rejected Washington’s allegations of preparing to invade the neighboring country.

“Those costs will include financial sanctions, and it’s been reported those sanctions will include key financial institutions, export controls that target industries; enhancements of NATO force posture on ally territory; and increased security assistance to Ukraine,” Sherman added.