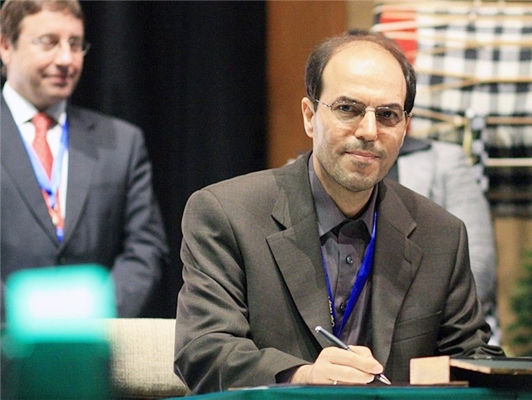 Iran’s envoy to the United Nations slammed the Israeli regime as the only obstacle in the way of establishment of a nuclear weapon free Middle East.

Addressing a meeting of the First Committee of the United Nations General Assembly in New York on Friday, Iran’s Ambassador and Permanent Representative to the UN Hossein Dehqani said the Israeli nukes pose the most dangerous threat to the security of non-nuclear weapon countries in the Middle East.

I would like to express my warmest congratulations on your election to the Chairmanship of this Committee and assure you of the full cooperation of my delegation. We are happy that this important committee is being held under the guidance of a wise and experienced diplomat from Algeria whose dedicated service to the cause of disarmament is well-known.

My delegation associates itself with the statement made by Indonesia on behalf of the Non-Aligned Movement.

We seriously follow the debates on issues on the agenda of this Committee, as they deal with the most important common goods of all nations, i.e. disarmament and international security. As our detailed positions on disarmament issues will be elaborated in thematic debates, I will therefore focus only on certain issues of particular importance to us.

Nuclear disarmament remains the first and foremost priority in the disarmament and international security agenda. The mere existence of nuclear weapons is a source of threat and distrust in international relations. They undermine the Charter-based principle of equal right of all States to peace and security and the foundations of international humanitarian law. Nuclear disarmament is a vital undertaking, because the consequences of inaction can be global catastrophe. Along with reaffirming commitment to nuclear disarmament, action and political will is required to fulfill that objective.

Seven decades after the first use of atomic weapons which created a humanitarian disaster and killed more than 200,000 people, there is no absolute guarantee that such weapons will not be used again. Thousands of them that are associated with military strategies and war plans, which contemplate their use under certain circumstances, continue to exist in the arsenals of nuclear-weapon States and other possessors.

That is because nuclear-weapon States are not complying with their nuclear disarmament obligations. Almost half a century after the conclusion of the NPT under which all the States parties have an explicit legal obligation to achieve the total elimination of nuclear weapons, the gap between that nominal commitment and its implementation in practice is so wide. Upholding the integrity and credibility of NPT depends on the full implementation of all the obligations therein, in particular on nuclear disarmament.

Even more disappointing, contrary to the commitment of nuclear-weapon States to diminish the role of nuclear weapons in their military doctrine, multi-billion-dollar programs for modernizing and replacing the nuclear arsenals and developing new types of advanced nuclear weapon systems are underway, in particular in France, United Kingdom and the United States.

Undoubtedly, they should be held accountable for such willful non-compliances with their obligations under Article VI of the NPT. The grave risks and ramifications of persistent non-compliance with such obligations should not be taken lightly. They must stop violating their nuclear disarmament obligations. We will continue to express our deep concerns in this regard in appropriate international fora.

The lack of progress in the implementation of the very commitments that nuclear-weapon States have already embraced in the context of NPT Review Conferences has rendered the so-called step-by-step approach to nuclear disarmament ineffective. This approach is not working and will not lead to a world free of nuclear weapons. This verdict is based on facts. No multilateral nuclear disarmament negotiations have taken place during the past two decades as a result of the persistent rejection of any proposal to commence nuclear disarmament negotiations in the Conference on Disarmament. Even the CTBT, with all its imperfections and loopholes, is still in limbo and the politically motivated attempts, by a certain country, in abusing the UN Security Council to pass a resolution on this Treaty is neither legitimate nor a solution.

Step-by-step approach has failed to even establish and consolidate a legally-binding global norm against nuclear weapons testing or production and stockpiling of fissile material for nuclear weapons. Those who adamantly continue to insist on the failed step-by-step approach to nuclear disarmament should note that they are insisting on a recipe for ensuring the indefinite retention of nuclear weapons, which, definitely, is contrary to legal obligations under Article VI of the NPT.

Historical facts attest that adopting such an approach was successful in banning and eliminating chemical weapons. Total elimination of nuclear weapons is the only absolute guarantee against their threat or use and a comprehensive nuclear weapons convention can provide such a reliable and lasting guarantee. The Islamic Republic of Iran will continue to actively engage in all international efforts to take forward multilateral nuclear disarmament negotiations.

Iran has a strong interest in and commitment to non-proliferation of nuclear weapons and has been at the forefront of regional and international efforts to achieve the universality of the NPT. As it is well known, in 1974, Iran proposed the establishment of a nuclear-weapon-free zone in the Middle East. It was strongly supported by the international community and numerous resolutions and decisions were subsequently adopted by the UNGA and NPT Review Conferences on its realization. But, the Israeli regime, which possesses nuclear weapons, is the only obstacle in the way of the establishment of this zone and continues to block all international and regional efforts to fulfill this goal. You may all recall that, the 2015 NPT Review Conference was unfortunately unable to adopt a final document, mainly due to an external factor: the pressure of a non-party to the NPT, i.e., the Israeli regime, to certain NPT States parties, who finally objected to the adoption of final document. It happened, because the final document had contained a decision on a nuclear-weapon-free zone in the Middle East.

Nuclear weapon in the hands of Israeli regime that has repeatedly committed aggression, occupation, genocide and terrorist acts pose the most dangerous threat to the security of non-nuclear weapon States Parties in the Middle East. This situation cannot be sustained. Therefore, the Israeli regime must be compelled to accede, as a non-nuclear weapon party and without any condition or further delay, to NPT and other major treaties banning weapons of mass destruction.

We recognize the legitimate right of States to access to arms needed for their self-defense. At the same time, we are deeply concerned about the continuous flow of sophisticated offensive conventional weapons into the volatile region of the Middle East in particular to those who are engaged in aggression against other countries and violation of international humanitarian law, in particular Israel and Saudi Arabia.

It is over a year that Saudi Arabia has waged a brutal war in Yemen killing thousands of civilians and destroying civilian infrastructures like schools and hospitals in massive and indiscriminate air strikes with the US and the UK arms and munitions. In its latest atrocity, on Saturday October 8th Saudi Arabia bombed a funeral gathering two times, killing around 150 civilians and wounding almost 600. This appalling carnage is a brazen violation of international humanitarian law. We strongly urge the relevant arms exporting countries to comply fully with their obligations under international humanitarian law and stop selling arms and providing logistical military assistance to Saudi Arabia and United Arab Emirates in their aggression against Yemen. Ironically, the so-called harbingers of human rights in the international fora are taking holidays when it comes to the oppressed peoples of Yemen and Palestine.

We are facing a difficult and complex situation in the field of international security and disarmament. But we will continue to proceed with hope and perseverance in pursuing our goals in disarmament. Securing a world without nuclear weapons will remain our highest priority. This is our common responsibility; Let’s resolutely work together to that end; Let’s consume all these inhumane weapons before they consume us all; let’s collectively call upon all nuclear-weapon possessors to fulfill all their legal obligations on nuclear disarmament; let’s live up responsibly to our ethical and moral responsibility in making a more secure world for all nations and all generations. We are confident that it is within reach. This can be realized only by resorting to the force of logic, not the logic of force; through diplomacy, and not coercion or intimidation.

As a living example, the Joint Comprehensive Plan of Action (JCPOA) proved that with serious and sustained diplomacy, solution to technically and politically complex issues is within reach even at a difficult time of international security. We hope that our deliberations in this Committee will contribute to upholding internationally agreed principles and to the advancement of our common objectives.