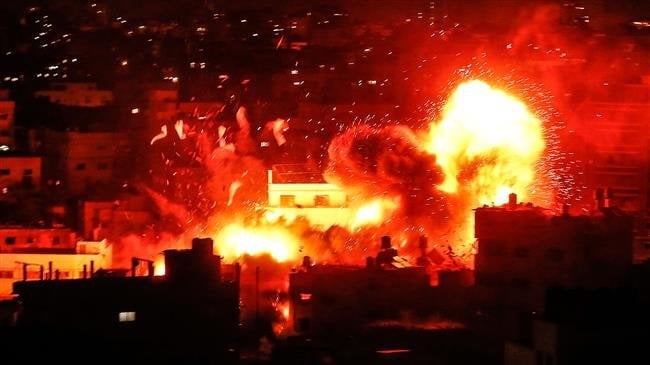 The headquarters of Al-Aqsa TV station run by the Palestinian resistance movement Hamas was razed to the ground on Monday in Israeli airstrikes on Gaza amid a fresh round of violence in the besieged enclave, which the world blames on the Israeli forces.

The building of Al-Aqsa TV station located in an-Nasr district, west of Gaza, was totally destroyed by the Israeli raids, footage of the attack shows.

Many local residents had reportedly fled after calls to evacuate, witnesses said. The TV station said it would resume broadcasts soon.

The raid was part of the fresh airstrikes and rocket attacks by Israeli warplanes and artillery which are targeting areas “throughout” the Gaza Strip and have so far killed several people, including a Hamas commander.

The Palestinian Ministry of Health puts the number at 10, within around 24 hours, according to media reports.

In retaliation, the Palestinian resistance has so far fired over 400 rockets, mortar bombs, and at least one anti-tank missile from Gaza into the occupied territories, including military positions, Israeli and Palestinian media reported.

A spokesman of the Ezzedine al-Qassam Brigades, the military wing of Hamas, said the Joint Operations room for Palestinian Resistance has vowed to expand the range of military strikes deeper into the occupied territories.

Ashkelon is just the beginning as a million Zionist colonists may enter the range of our rockets, Abu Obaydah said in his tweet.

The Qassam Brigades also said two Israelis were killed and 19 others were wounded in its counter-attacks against Ashkelon early Tuesday.

In one of the rocket attacks, an Israeli bus in the northeast of Gaza was directly hit and exploded by a Kornet ATGM.

The Israeli military claimed in a statement that the aerial aggression was in response to the rockets and mortar shells fired against the southern parts of the occupied territories, wounding over 40 Israeli settlers, one in critical condition.

However, the international community blames the Israeli regime for the renewed violence in the impoverished enclave.

inevitability of the victory of the oppressed and in the forefront of them the conscious and resisting Palestinian people,” it said in a statement.

Russia, Jordan and an Egyptian delegation all declared Monday that Israel is responsible for the violence in Gaza.

The Russian condemnation came after an Egyptian delegation to Gaza, set up with the purpose of creating a ceasefire, placed the blame on Israel for starting the violence.

The European Union and the United Nations also urged the immediate end of rising tensions surrounding the Gaza Strip.

In a written statement, Maja Kocijancic, the spokeswoman for EU foreign policy chief Federica Mogherini, said that “the escalation of violence in and around Gaza during the last hours is very alarming”.

“The EU urges both parties to step back from the brink and avoid any further actions that would contribute to the escalation, put civilians’ lives at risk, and jeopardize recent efforts towards reducing tensions,” she said.

UN Secretary-General Antonio Guterres called the situation in Gaza “an extremely worrying situation,” stating that “the suffering of the people of Gaza is unimaginable”. The UN chief said that the tensions in Gaza should be defused as soon as possible, warning that otherwise it could turn into a “massive tragedy”.

“He (Guterres) urges all parties to exercise maximum restraint. The United Nations Special Coordinator, Nickolay Mladenov, is working closely with Egypt and all concerned parties to restore calm,” Farhan Haq, the deputy spokesman for Guterres, said in a statement.

Israeli Prime Minister Benjamin Netanyahu held an emergency security meeting with his minister of military forces and other senior Israeli military officials in Tel Aviv on Monday, a day after the Israeli raid on Gaza ignited new tensions in the region.

The flare-up came just a day after Israeli special forces infiltrated the Gaza Strip, assassinating a top Hamas commander, while subsequent Israeli airstrikes killed six others, including another commander with the Palestinian resistance movement. Reports also said that an Israeli officer was also killed during the ensuing clashes.

Tensions have been running high near the Gaza fence since March 30, which marked the start of a series of protests dubbed “The Great March of Return.” The Palestinian protesters have been demanding the right to return for those driven out of their homeland by Israeli wars and other acts of aggression since 1948.