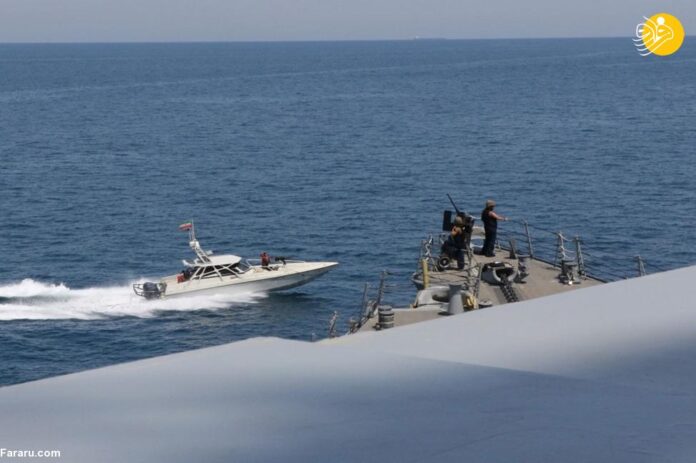 Iran’s Islamic Revolution Guard Corps has dismissed the US’ account of the April 15 incidents in the Persian Gulf, describing it as a fake scenario written in “Hollywood style.”

The Public Relations Department of the IRGC Naval Forces released a statement on Sunday saying the clues contradict the Americans’ claims and the Islamic Republic will respond decisively to any miscalculation.

The US Navy’s 5th Fleet claimed that six warships conducting drills with US Army Apache attack helicopters in international waters off Iran were repeatedly harassed by 11 Iranian IRGC vessels on Wednesday.

“The Iranian ships repeatedly crossed in front and behind the US vessels at extremely close range and high speeds,” reads the US statement.

In reaction to the claim, the IRGC has released the following statement:

In the Name of God,

In recent weeks, we have witnessed the recurrence of unprofessional behaviour by the US Navy in the Persian Gulf, which has threatened the security and tranquillity of the region and posed new risks.

Among these measures was the blocking of the Shahid Siavashi ship on its return from a mission in the southeast of the Farsi Island, which occurred at 11:00 pm on April 6, 2020.

According to the data extracted from the ship’s black box, the US warship terrorists were engaged in high-risk moves ignoring initial warnings, but finally were forced to stray off the path of the IRGC naval vessel after receiving warnings from local forces.

At 6 am, April 7, 2020, the American terrorist warship with the registration number CG 72 again blocked the way of Shahid Siavashi vessel with a dangerous move in an area in front of Assaluyeh and about 30 miles from the Iranian platforms without paying attention to the warnings of local forces while the Iranian vessel was patrolling in the region. Eventually, the Iranian vessel managed to continue on its way with a professional and smart move and bypassed the American warship.

Accordingly, the IRGC Naval Forces increased the capacity of its patrols in the Persian Gulf waters to prevent illegal, unprofessional, dangerous and even adventurous behaviour of US terrorists, and also to strengthen the security of Iranian vessels and combat fuel smuggling.

In this regard, on April 15, 2020, after declaring “shooting mode” in the training areas, which had been marked with special coordinates on the map in the past, the IRGC sent a group of 11 boats to the region which faced with US warships and vessels.

Despite the unprofessional and provocative actions of US terrorists and their indifference to the warnings and notices, they were forced to get away from the path of the IRGC’s naval vessels with the resilience and bravery of local forces.

This comes as the US Navy’s 5th Fleet in the region, in its official statement, quoted an incorrect and purposeful account of the incident, which indicates that the Americans are interested in the Hollywood version of events.

We urge Americans to abide by international regulations and maritime protocols in the Persian Gulf and the Sea of Oman, and to refrain from any adventures, lies and fake narratives. The IRGC Navy and the powerful Iranian Armed Forces consider the aliens’ dangerous moves in the region as a threat to Iran’s national security and a red line, and will respond decisively to any miscalculation.