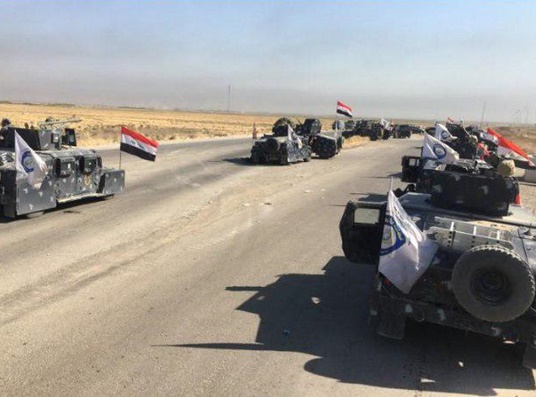 The Iraqi central government forces have retaken the Kurdish-held city of Kirkuk on Monday in an operation launched on Sunday in response to Kurdistan’s independence referendum.

A convoy of armoured vehicles from Iraq’s elite Counter-Terrorism Force seized the provincial government headquarters in the centre of Kirkuk on Monday afternoon, residents said, less than a day after the operation began.

A dozen armoured vehicles arrived at the building and took up positions nearby alongside local police, residents said. They pulled down the Kurdish flag and left the Iraqi flag flying.

Prime Minister Haider al-Abadi ordered that the Iraqi flag be hoisted over Kirkuk and other disputed areas claimed by both the central government and the Kurds, who defied Baghdad to hold a vote for independence on September 25.

Baghdad described the advance as largely unopposed, and urged the Kurdish security forces known as Peshmerga to cooperate in keeping the peace. The Peshmerga said Baghdad would be made to pay “a heavy price” for triggering “war on the Kurdistan people”.

Kirkuk, one of the most ethnically and religiously diverse cities in Iraq, is located just outside the autonomous Kurdish zone. Kurds consider it the heart of their homeland and say it was cleansed of Kurds and settled with Arabs under Saddam to secure control of the oil that was the source of Iraq’s wealth.

Oilfields near Kirkuk, most of which were recaptured by Iraqi forces, halted production, but Baghdad said it would quickly restart it. “We’ve got confirmation from military commanders that it’s a matter of a very short time,” a senior Baghdad oil official told Reuters. “Our brave forces will regain control of all Kirkuk oilfields and then we will restart production immediately.”