Iraqi Teams Being Sent to Iran, US to Ease Tension 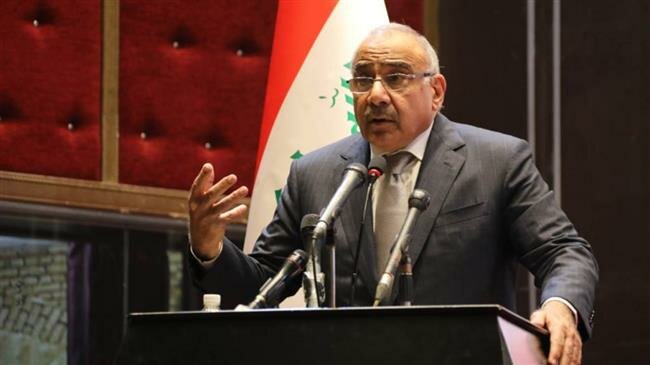 Iraqi Prime Minister Adel Abdul Mahdi says his country is set to send delegations to the US and Iran to help “halt tension” between the two sides amid growing concerns over a military conflict as Washington ratchets up its belligerent rhetoric against Tehran and builds up its military presence in the region.

“Iraq has high-level contacts (with both parties), and its vision is very close to that of the European Union, which seeks to settle the crisis in the region,” Abdul Mahdi said at a weekly press briefing in the capital Baghdad on Tuesday.

“US and Iranian officials have assured us that they do not want to go to war,” he pointed out.

Abdul Mahdi added, “Iraq is in the stage of transferring messages between Washington and Tehran. It tries to defuse crisis between the two sides. It is our responsibility to defend Iraq and its people, and ensure security in the face of the threat of war.”

He went on to say that there were no Iraqi groups that wanted to push towards a war between Tehran and Washington.

The remarks came only two days after Iraq’s state-run news agency reported that a Katyusha rocket had landed in Baghdad’s high-security Green Zone near the huge US Embassy compound without causing any casualties.

Brigadier General Yahya Rasoul, the spokesman for Iraq’s Joint Operations Command, told the Associated Press that the rocket fell near Iraq’s statue of the Unknown Soldier, and was being investigated.

In the aftermath of the rocket attack, US President Donald Trump issued a direct threat to Iran on Sunday, suggesting that the Islamic Republic will be destroyed if it attacks his country’s interests.

“If Iran wants to fight, that will be the official end of Iran. Never threaten the United States again,” Trump wrote on Twitter. He did not clarify what threats he meant.

Iran’s Foreign Minister Mohammad Javad Zarif, in response, warned Trump to avoid threatening Iranians, advising him to try respect as it is the only approach to the Iranian nation, which may bear fruit.

The Iranian foreign minister added that the policy of “economic terrorism and genocidal taunts” pursued by Trump would fail to “end Iran.”

“Iranians have stood tall for millennia while aggressors all gone,” he noted.

The top Iranian diplomat emphasized that Trump has been “goaded” by the B-Team and “hopes to achieve what Alexander, Genghis & other aggressors failed to do.”