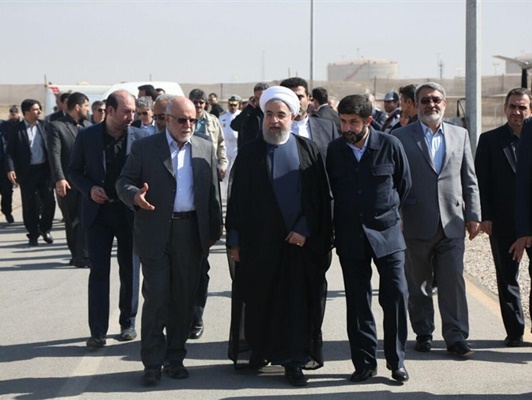 Iranian President Hassan Rouhani on Sunday inaugurated a number of development projects, including those for developing oil fields, in the southwestern province of Khuzestan.

During a visit to the central train station at the provincial capital of Ahwaz, President Rouhani launched a modern train control and monitoring system.

The new system, which cost $80 million to develop, will improve the security of railroad transportation between Ahwaz and Tehran.

In a separate ceremony, the president inaugurated a project for development of Yadavaran oil field in the energy-rich province.

According to reports, Iran’s oil extraction from Yadavaran -in cooperation with China’s Sinopec- has reached the record high of 115,000 barrels a day. Separately, the president launched a project through video conference on development of a number of oil fields located in the western banks of the Karun River.

Expansion of the northern and southern Azadegan oil fields, as well as Yadavaran and north Yadavaran fields, are expected to raise Iran’s crude output by 300,000 bpd.

The last project inaugurated by President Rouhani on Sunday was one to channel fresh water to Dasht-e Azadegan in Khuzestan Province. The project will supply drinking water to residents of 7 towns and 50 villages in the region.

The province of Khuzestan, neighboring Iraq and lying on the Persian Gulf coasts, is a major oil and gas producing region in Iran.