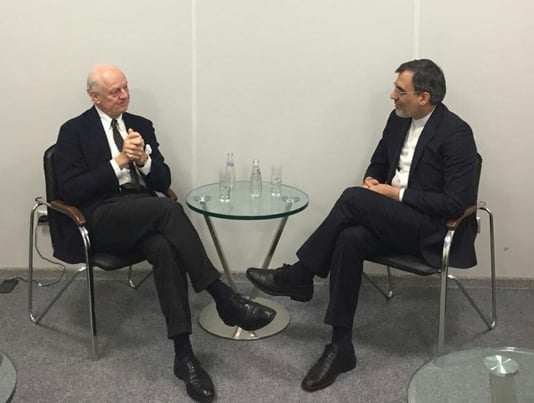 During the Tuesday meeting, which was held on the sidelines of the Syrian National Dialogue Congress, the two sides emphasized the need for continuing consultations and cooperation to end the Syrian crisis.

They also reviewed the process of the Syrian National Dialogue Congress held in Sochi, as well as the actions and plans of the UN envoy for Syria.

The Syrian National Dialogue Congress kicked off in the Russian Black Sea resort of Sochi on Tuesday. The opening of the Congress was delayed as a group of armed opposition members arriving from Turkey had set preconditions for their participation.

Political delegations from Iran, Russia and Turkey, as the three countries which initiated the negotiations, as well as a UN delegation led by de Mistura attended the talks.

A number of documents, including a final declaration on the principles of resolving the Syria crisis, may be adopted at the Congress. Besides, permanent committees, including the one on the constitutional reform, may be established.