Iranians listen to music with all their hearts: German musician 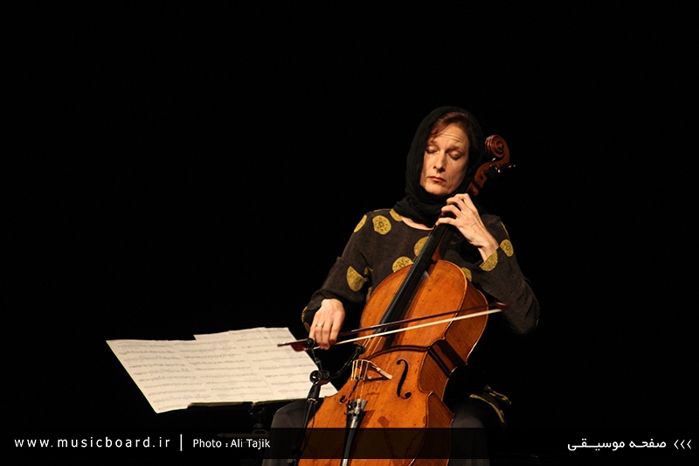 I have found it easy to establish a bond with the Iranian culture and traditions; Iranians listen to music with all their hearts, said Lechner.

Well-known German violoncellist Anja Lechner was born in Kassel. Along with François Couturier, a veteran French pianist, she first performed Tarkovsky Quartet at Tehran’s Vahdat Hall on February 16, 2013 with. The following is the translation of an excerpt of an interview that Ramin Sedighi, a journalist with honaronline.ir, has conducted with the German musician:

Ms. Lechner, have you had a good time in Iran?

I must answer your question in one word: absolutely. Its attractiveness has made me travel to Tehran for a third time. During my trips to Iran, I have found it easy to establish a bond with the local culture and traditions. If I research my genealogy, I might come across my Eastern stock.

Were you satisfied with your two performances at Niavaran Cultural Center?

First of all, I found it unusual to stage solo performances for two nights in a row; it’s uncommon even in places where there is a mass audience. All tickets were sold out for the two solo performances, something which I had never experienced throughout my musical career. It struck me as unusual. To me, it’s one of the reasons why I consider performing in Iran appealing.

How was your performance received?

What was more important than the packed house was the way the audience formed a bond with us. That how much listeners concentrate on the quality of performance or digest the music in a heartfelt manner differs from audience to audience. For instance, I have not seen it much in Germany or other countries. People there might have considerable knowledge of previous works, but they listen to music, relying more on their prior knowledge than listening to the music.

Musicians do not experience what happens in Iran very often; particularly in my case, because I opted for pieces which had not been heard much.

When did you start playing music and what made you go for violoncello?

I think it’s the musical instrument that picks you. Initially, I played the piano, but suddenly I took a liking to violoncello when I was nine. That was when I took it up.

Do you possess academic qualifications in music? Do you teach music?

Yes, I did a course in Munich; I received my master’s degree in Switzerland and completed my higher education in the US.

In some parts of Iran, music is part and parcel of the daily lives of people. Are you familiar with Iran’s folklore music?

I have not been in close contact with it but I have a lot of Iranian friends who share Iranian music with me. In my opinion, the approach that Iranian ethnic groups have toward music is noticeable and astonishing. This style of Iranian music is the very music which is dying out in the West. It’s true that people there keep listening to music but they no longer know what music is for. It lies in the background of their lives, thus it does not serve any function. From my perspective, that people don’t know why they listen to music marks the beginning of the end of music in the world.

The traditions that exist in the music of Iranian ethnic groups keep music alive, so Iranian people should preserve them.