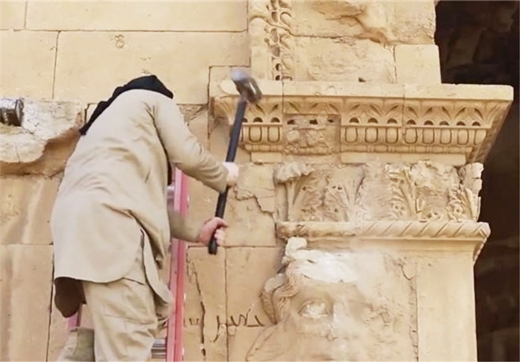 Larijani denounced the destruction of archaeological sites in Iraq and Syria, and said as long as terrorists remain in the region such destruction will continue.

Iranian Parliament Speaker Ali Larijani voiced deep concern over recent moves by the Islamic State in Iraq and the Levant (ISIL) terrorist group to destroy ancient artifacts in Iraq and Syria, calling for international efforts to stop the heinous acts.

Speaking in a meeting with Director of the Metropolitan Museum of Art Thomas P. Campbell in New York, Larijani denounced the destruction of archaeological sites in Iraq and Syria, and said as long as terrorists remain in the region such destruction will continue.

“To halt the destructions, global efforts should be made,” the Iranian parliamentarian said.

“The world pays no attention to the human heritage,” Larijani said, adding, “But we will do our best (to save the heritage).”

ISIL’s demolition of the Saint Elian Monastery in the central Syrian province of Homs is the latest in a long campaign that has destroyed or extensively damaged some of the Middle East’s most spectacular archaeological and cultural sites.

Some of the world’s most precious cultural treasures, including ancient sites in the cradle of civilization, are in areas controlled by the group and at the mercy of extremists bent on wiping out all symbols of culture and history. The militants have also targeted churches, mosques and museums.

The militants are also believed to be selling ancient artifacts on the black market in order to finance their bloody campaign across the region.