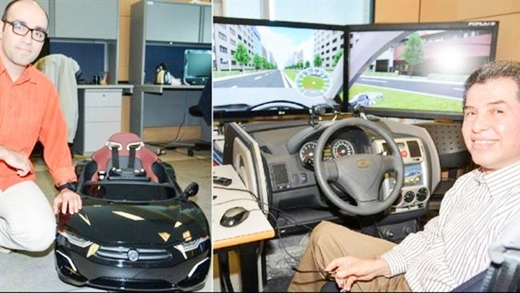 An automated car will temporarily take over from a distracted driver, and pull over and park or head home if someone is unfit to drive, the researcher working on the project predicted.

Two Iranian scientists are revolutionizing research and development in the field of driverless automobiles.

“So maybe automobile is a misnomer,” Rad said during an interview at the Autonomous and Intelligent Systems Laboratory on the campus in Burnaby, in Canada’s British Columbia.

“What we’re seeing now is a paradigm shift, in a sense that the car that we know is gradually morphing into an autonomous robot. The task of a driver will change from driving to supervising the car.”

Rad and PhD student Mehran Shirazi displayed the driving simulator consisting of a car seat with a steering wheel, a dashboard, and—in place of a windshield—three flat-screens showing a city street. Two infrared cameras sit on the dash, facing the driver.

The professor explained that the cameras constitute an eye tracker which discerns where the driver is looking. This system can detect whether a driver is sending a text message, intoxicated, or falling asleep.

Rad’s research team uses Fatal Vision goggles to simulate the impairment associated with particular blood-alcohol concentrations. In the future, he predicted, an automated car will temporarily take over from a distracted driver, and pull over and park or head home if someone is unfit to drive.

“The human is driving the car,” Rad said. “But once it sees that the human is talking (on a cellphone) or sending texts, it will take over. Or, in worse cases, if the car recognizes that this person is drunk, it will take control of the car.”

According to Rad and Shirazi, cars of the future will pair the eye tracker with a front-facing camera. This camera will be used to detect jaywalkers and road signs.

Nevertheless, Rad predicted that fully driverless cars will not become widespread for another 20 years as developing the artificial intelligence required for self-driving cars is a very demanding job.