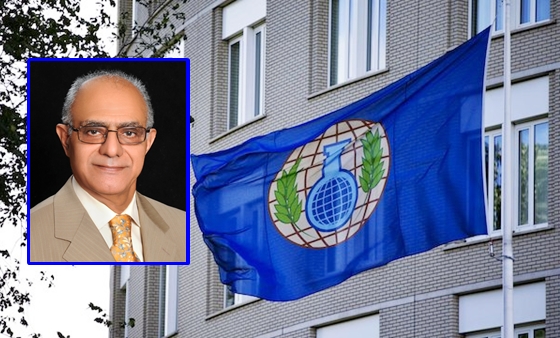 Mahdi Balali-Mood, a ceaseless educator on the medical aspects of chemical weapons, has been awarded the second annual Hague Award of the Organization for the Prohibition of Chemical Weapons.

Dr. Mahdi Balali-Mood, a senior professor at Mashhad University of Medical Sciences, has won the second annual Hague Award of the Organization for theProhibition of Chemical Weapons.

Balali-Mood, who is known as the father of Iran’s toxicology, and Dr. Alastair Hay of the United Kingdom have been named joint recipients of the second annual OPCW-The Hague Award.

The following is the translation of a story Ettela’at daily published on the Iranian professor’s achievement on November 29:

The 2015 award winners will be honored at a presentation ceremony – attended by representatives of 192 countries – at the Headquarters of the Organization for the Prohibition of Chemical Weapons (OPCW) in The Hague on November 30.

The Iranian professor, who largely served the victims of chemical attacks during the Iran-Iraq war, has released multiple books and articles on the medical-toxicological aspects of chemical elements in war which come with related documents and images.

Dr. Balali-Mood, who had left for Britain to pursue his studies, returned home during the war because he felt he was duty-bound to help his countrymen.

Back then, he said, those had been exposed to chemical agents would be sent to Mashhad and admitted to the holy city’s Imam Reza and Ghaem hospitals.

“During the years of war, I would travel to different cities to treat patients and carry out research projects on those wounded in action in addition to what I was doing [routinely] in Mashhad. I remember that I could not sleep more than two-three hours due to my heavy schedule,” he added.

Dr. Balali-Mood, who works closely with WHO and OPCW to advocate for victims and to develop international guidelines for response to the use of chemical warfare agents, further said that he has published the findings of his scientific research on the chemical attack victims – which come with videos and images – in different conferences.

The Iranian researcher, who has dedicated his career to the treatment of victims of chemical warfare agents, has prolifically penned books on Clinical Toxicology of Chemical Warfare Agents, Organophosphorous Pesticide Poisonings, Heavy Metals, Drug Abuse/Overdose, Epidemiology of Poisonings, Occupational and Environmental Toxicology, Natural Toxins, including snake and spider bites, toxic plants and mushrooms (31 in total).

Iran is an active member of the Organization for theProhibition of Chemical Weapons which was established in 1997. The Award, created by the OPCW as an outcome of its winning of the 2013 Nobel Peace Prize [and supported by a generous financial contribution from the City of The Hague], is intended to honor and recognize individuals and non-profit, non-governmental organizations that have made an outstanding contribution to achieving a world free of chemical weapons.