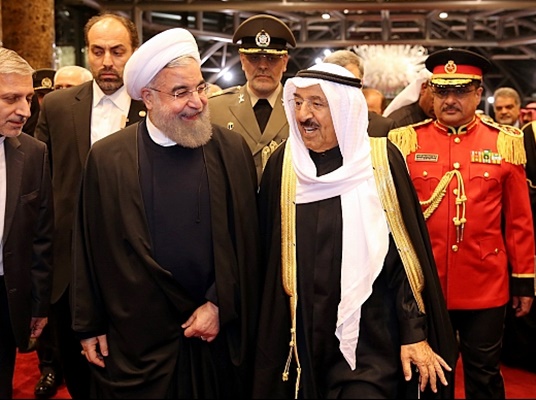 Iranian President Hassan Rouhani’s recent regional visits pose a dilemma: Whether they are in the interest of Iran and its foreign policies, or merely provide Saudi Arabia and its regional allies with clues about Tehran’s political plans in the region.

Although recent regional visits — to Kuwait and Oman — by Iran’s President Hassan Rouhani are indicative of the country’s goodwill and determination to establish cordial relations with the Middle Eastern and Persian Gulf littoral states, they can also serve the intentions and objectives of the members of the [Persian] Gulf Cooperation Council ([P]PGCC), particularly Saudi Arabia, given their security moves and measures during the past month, such as the inauguration of the North Atlantic Treaty Organization (NATO) office in Kuwait in late January.

According to a Farsi report by Tabnak news website, recent visits by Kuwaiti officials to Tehran which were, later, reciprocated by President Rouhani, irrespective of what is going on offstage, are very important in one aspect, as a closer look at them clearly explains the reason why some states currently attach great importance to reciprocal moves aimed at creating tension in the Middle East region.

Rouhani’s trips to Kuwait and Oman can, perhaps from a wider point of view, be interpreted as joint efforts to relieve tensions and foster more friendly relations in the region. President Rouhani’s trip to Kuwait, which was made in response to the visit of Kuwaiti Foreign Minister Sheikh Sabah al-Khalid al-Hamad al-Sabah to Tehran, showed Iran’s resolve to further forge ties with its southwestern neighbour.

Nevertheless, regardless of their objectives, these visits and efforts — to develop closer relations — will be in no way in Iran’s favour as they would fail to shift the balance of power towards Iran in the region, in case the security moves and measures initiated and taken, respectively, by the Persian Gulf littoral states over the past 30 days as well as their consequences and outcomes turn out to be what they are actually anticipated to be.

Two scenarios unfold about the military moves and security measures by [P]GCC countries:

On January 24, Jens Stoltenberg, NATO’s Norwegian secretary-general, arrived in Kuwait to open the organization’s new office in the country.

Speaking at the centre’s inauguration ceremony in Kuwait, Stoltenberg said, “It (the office) will be a vital hub for cooperation between the alliance and our [Persian] Gulf partners.”

The centre has been set up to provide the Persian Gulf littoral states with military assistance by holding advanced training courses in areas including weapons proliferation, energy security, cyber defence as well as chemical, biological and nuclear attacks.

The NATO centre in Kuwait City was established based on the Istanbul Cooperation Initiative (ICI) launched by NATO leaders in 2004 with the aim of improving security ties and cooperation with the Middle East countries, particularly the Persian Gulf Littoral states.

Addressing the same ceremony, Stoltenberg added, “We face common security threats like terrorism, weapons proliferation and cyber-attacks. And we share the same aspirations for peace and for stability. So it is essential that we work more closely together than before.”

The second scenario pertains to a report published a little while ago by The Wall Street Journal which said the Trump administration is in talks with Arab allies about having them form a kind of quasi-NATO military alliance in the region, that would share intelligence with Israel to help counter Iran.

The alliance would include countries such as Saudi Arabia and the UAE that are avowed enemies of Israel as well as Egypt and Jordan, which have longstanding peace treaties with Israel. Other Arab countries could also join the alliance.

For the Arab countries involved, the alliance would have a NATO-style mutual-defence component under which an attack on one member would be treated as an attack on all. However, the US and Israel would assume a logistic role offering military and intelligence support to the alliance.

In their negotiations with the Trump administration members in the past two weeks, the Saudi and Emirati officials praised Israel’s security and intelligence capabilities and, implicitly, agreed to, in case of forming the coalition, share intelligence with the Zionist regime.

The opening of the NATO office in Kuwait is not a security threat against Iran per se, as its goals and mechanism are based on providing training and promoting intelligence cooperation. Nevertheless, the Persian Gulf littoral states have always had a glance at Iran. In addition, prior to this, NATO has had military operation centres in Iran’s proximity.

The report by The Wall Street Journal has, nevertheless, a totally different story. In case it is true and such a coalition is created in the Persian Gulf, undoubtedly, Iran would be its main target. The alliance will definitely disturb the regional power balance in a way which would fail to be in Iran’s favour. In other words, in case Yemen is perceived as the current battlefield between Tehran and Riyadh, then, the ground would already be completely prepared for an all-out war between Iran and the members of the coalition.

This, of course, requires a more serious and comprehensive analysis, as the security aftershocks of such a war will have enormous impacts on the present powers of the Middle East and will even shake Russia and China.

Regional trends and developments have, so far, been positive for Iran in terms of security. Nonetheless, a shift in the trends would be what Saudi Arabia deeply desires to take place. The recent remarks by Saudi Arabia’s Foreign Minister Adel al-Jubeir, in which he expressed optimism and hope towards the challenges ahead in the region, are a witness to this.

Trump has created a pleasant atmosphere in the region for Saudi Arabia, which is, apparently, an opportunity the country would not easily miss.

President Rouhani’s regional visits — which, most probably, will continue in the future through other channels, however, can either serve as a brake to slow or stop the fierce military-security competition, which has already begun in the Persian Gulf, or give clear signals to Saudi Arabia indicating Iran’s regional objectives, intentions and policies, preventing any likely miscalculations by Riyadh in its future plans.