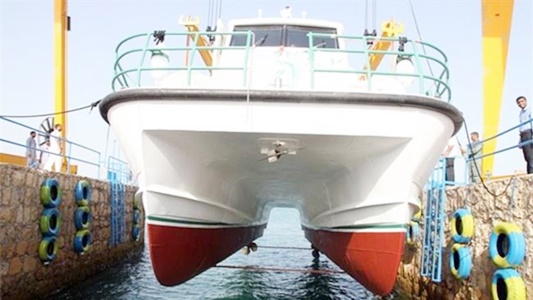 An Iranian company has begun to manufacture the country’s first catamaran passenger ferry with a capacity to carry scores of people.

Work on the construction of the new 26-metre vessel that has a capacity to carry 158 people on board has already begun at Qeshm Island’s Madkandaloo’s shipyard, according to Tasnim, quoting Reza Almasi, a senior company official.

The watercraft features two parallel aluminium hulls of equal size with double decks. It also enjoys the state-of-the-art navigation and safety systems. The company official said there are already negotiations for the construction of three such vessels.

Catamarans have a smaller hydrodynamic resistance than comparable mono-hulls, requiring less propulsive power from either sails or motors. These ships range in size from small to large such as naval vessels and car ferries.

Iran has recently taken steps to increase its maritime shipping capacity. Earlier this month, media reports said the country had placed orders worth nearly $2.4 billion with South Korean shipyards for the construction of ships to carry Iran’s oil and petrochemical products. The orders were placed by the Islamic Republic of Iran Shipping Lines (IRISL) and the oil producer Iranian Offshore Oil Company (IOOC).

The Korean companies were said to be Hyundai Mipo Dockyard, which is a subsidiary of shipbuilding giant Hyundai Heavy Industries Group, as well as Daewoo Shipbuilding and Marine Engineering Company.Meanwhile, China’s Dalian Shipbuilding Industry Company is also reportedly in talks with IRISL over new ship orders.

The agreements are part of Iran’s efforts to make a comeback in global shipping after the lifting of international sanctions earlier this year.