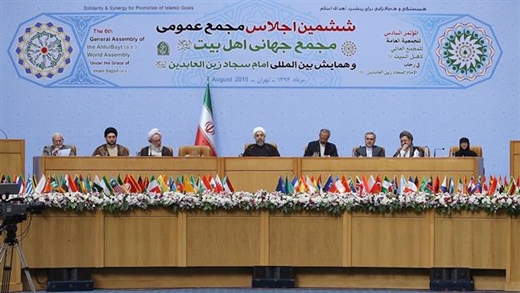 He emphasized that Iran would never use its scientific, spiritual and political power against neighboring states or any Muslim country in the region.

Iran’s President Hassan Rouhani warns that the enemy seeks to create divisions in the region and portray Islam as the religion of violence and extremism, urging resistance against such plots.

“The enemy intends to turn the religion of morality and brotherhood into a religion of violence, extremism, killing, discord and rifts and we should stand up to such deviation and distortion,” Rouhani said in an address to the opening ceremony of the 6th General Assembly of the AhlulBayt World Assembly in Tehran on Saturday.

He said all Muslims should remain united to thwart the plot and illustrate Islam as the religion of peace.

He further emphasized that Iran would never use its scientific, spiritual and political power against neighboring states or any Muslim country in the region.

Rouhani said that Iran’s strength lies in its logic and its power to negotiate, adding, “We will use our capability and power to establish peace, stability and security in the region.”

The Iranian president noted that Iran respects the values of Islam and democracy while observing the rights of minorities, saying Shiite and Sunni Muslims in the country are equal and live in peace and harmony.

He emphasized that Iran’s logic is based on peace, peaceful coexistence and unity among all Muslims.

The four-day 6th General Assembly of the AhlulBayt World Assembly opened in Tehran in the presence of representatives from 130 countries and some political and cultural figures. The meeting is aimed at reinforcing solidarity and convergence to promote the goals of Islam.