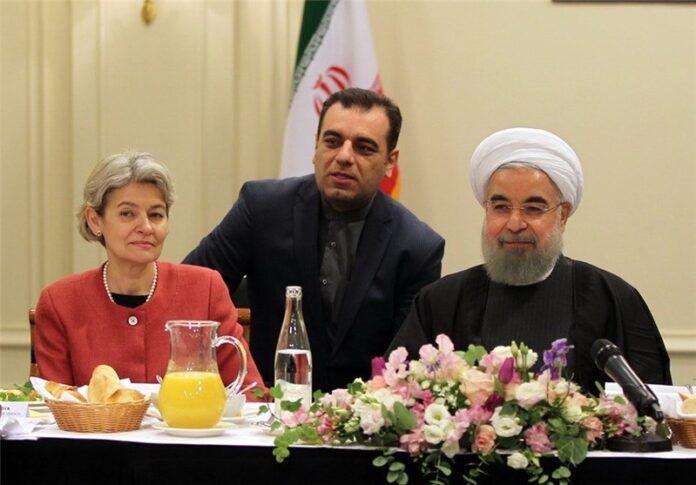 Iranian President Hassan Rouhani called on UNESCO, the United Nations’ cultural organization, to make utmost efforts to protect the endangered cultural works and historic sites in Syria and Iraq from the devastating activities of terrorist groups.

In a meeting with UNESCO Director-General Irina Bokova in Paris on Thursday, President Rouhani reminded international organizations, UNESCO in particular, of their heavy responsibility to safeguard the cultural heritage in war-torn countries like Syria and Iraq.

“Unfortunately, cultural and archeological sites in our region are being destroyed by terrorists, and destruction of these monuments is destruction of the identity of religions, cultures and thoughts,” the president warned.

He also cautioned that terrorist groups destroy the historic monuments in order to separate the youth from their identity and recruit them afterwards.

The president further called on UNESCO to take a more active role in using “cultural capacities” to combat violence and terrorism, specifically to prevent destruction of cultural heritage by terrorist groups.

Pointing to Iran’s World Against Violence and Extremism (WAVE) initiative -put forth to the United Nations General Assembly in September 2013- President Rouhani underscored that culture is the basis for implementing the WAVE resolution and guaranteeing its success.

He then proposed that the UNESCO initiate programs and practical culture-based plans in different countries to let school children know about the dire consequences of violence and extremism.

For her part, Bokova slammed the destruction of cultural heritage in the Middle East as a humanitarian tragedy, saying the UNESCO has focused efforts on the youth, given the fact that terrorists are trying to seduce them into taking extremist measures.

The director-general also expressed appreciation for the breadth of UNESCO’s cooperation with the Islamic Republic of Iran, spanning education, culture and science, and underlined the necessity to leverage these areas to bring about transformative change.

At the end of the meeting, she presented President Rouhani with the certificates for Iran’s two newly-inscribed World Heritage sites, Susa and the Cultural Landscape of Maymand, as well as for two Memory of the World registers, Al-Masaalik Wa Al-Mamaalik and Kulliyyāt-i-Sa’di; which all stand as symbols of cultural dialogue.

She also congratulated President Rouhani for Iran’s election to UNESCO’s Executive Board, one of the Organization’s governing bodies.