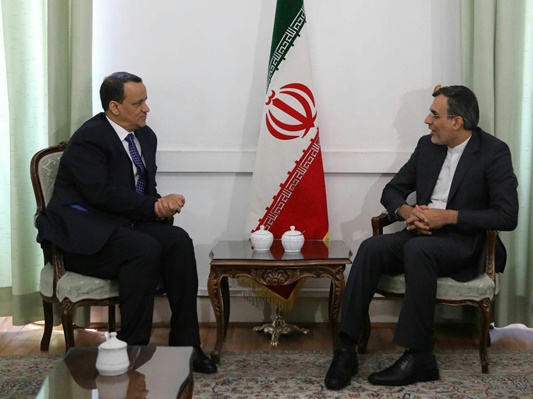 A top Iranian diplomat says the success of efforts to end the Yemen war is subject to the UN’s neutrality in the crisis.

Following the meeting, the Iranian official described his negotiations with the UN representative as good and constructive.

He said the UN envoy seeks to actively pursue a political settlement in Yemen, according to a Farsi report by Fars News Agency.

He added Cheikh Ahmed’s visit to Iran is within the framework of his trips to countries in order to win support for the responsibility he is tasked with at the moment.

Jaberi Ansari reiterated that Tehran backs the UN’s efforts to resolve the Yemen crisis and get out of the current situation as soon as possible.

He said Iran believes efforts will bear fruit only if the UN remains fully neutral in line with its international mission and try to build confidence between the warring sides.

He expressed hope with the initiative and practical plans that the UN will pursue, efforts will be made to lift the blockade on Yemeni people as soon as possible and end the aggression against the Arab country.

He also hoped that attempts will lead to direct talks between the warring sides, the crisis will be settled politically and the Yemeni people’s votes will be used as a yardstick in a bid to get out of the current situation.

He added that the Yemeni envoy has asked Iran to contribute to the current efforts in Yemen.