Iran Front Page
Home World Middle East We shouldn’t cause trouble for those who stand up for our rights:... 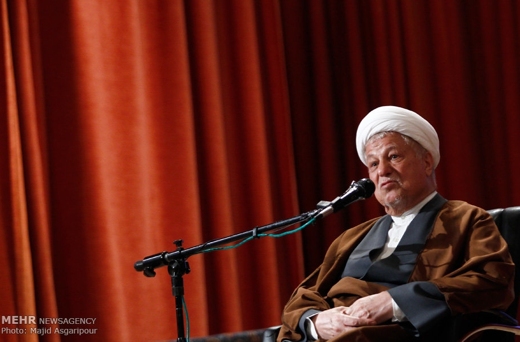 The US Congress is opposed to a nuclear deal and the Zionist lobby has gone into overdrive, we shouldn’t cause trouble for those who stand up for our rights, Rafsanjani said.

Plots hatched so many years ago to oversee the disintegration of regional countries are being put to the test again, Chairman of the Expediency Council Ayatollah Akbar Hashemi Rafsanjani was quoted by Mehr News Agency as saying.

Describing Iran as the reliable anchor of security in the region, Ayatollah Rafsanjani said, “Iran plays a vital role in safeguarding the region.”

He hailed the government’s foreign policy and said, “The whole world has realized that our logic in dealing with the nuclear case is the logic of peace and not war. Some are disrupting the process, though. The US Congress is opposed to a nuclear deal and the Zionist lobby has gone into overdrive. That’s why we shouldn’t cause trouble for those who stand up for our rights.”

Rafsanjani went on to say, “That does not mean that we should ignore those who hold opposite views; rather, logic should reign. Good things can come out of such disagreements if logic is the order of the day.”

He concluded, “Today’s conditions are not tougher than wartime conditions. Relying on preparedness and unity, we can ride out the storm.”