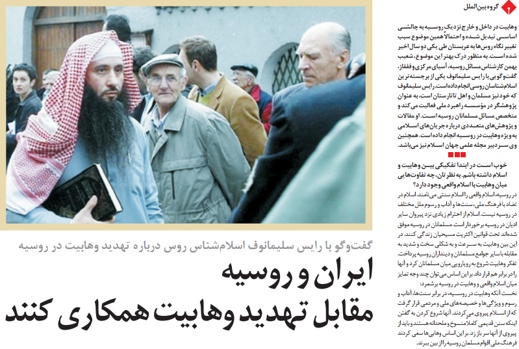 Wahhabism has turned into a fundamental challenge in Russia and that has probably led to a shift in the Russian stance on Saudi Arabia over the past two years. To get a better insight into the issue, Javan daily has published an interview with Rais Suleymanov, a distinguished Islamic scholar from Tatarstan and a researcher with the National Strategy Institute, who has published multiple articles about Islam, particularly Wahhabism, in Russia. What appears next is the translation of part of an interview that the daily published on May 18:

What impact have foreign countries had on the spread of Wahhabism in Russia?

Arab countries try to extend their political influence in Russia through the spread of Wahhabism. Saudi Arabia, Qatar and Kuwait are among key promoters and advocates of Wahhabism in Russia. In these Persian Gulf states, Wahhabism is the state ideology. That is why the state reaches out to charities as it tries to promote its ideology of choice.

Besides, even in countries whose state ideology is not centered on Wahhabism, Wahhabi entities are very active. For instance, Egypt’s Wahhabi institutions have established so close relations with the Russians that many Russian nationals who travel there to study at Egyptian universities are hired by these institutions.

That has turned studying abroad into a tool which contributes to the growing influence of Wahhabism in Russia. Many of the young Muslim Russians who have left their country for Saudi Arabia or Egypt to further their education have been swayed by Wahhabi speeches and preaching. They have also read Wahhabi books. So when they return home, they start promoting the beliefs and principles put forth in those books.

Another thing which has played a role in the growth of this ideology in Russia is the books [on Wahhabism] which have been written in Arab countries and or in Turkey and translated into Russian or languages of the ethnic groups living in Russia.

Can Iran and Russia fight Wahhabism? What characteristics should an anti-Wahhabism campaign have?

The major obstacle lies in the fact that Russian Muslims have little knowledge of Shiite critiques about Wahhabism; Iranian religious figures who have refuted the ideology remain unknown in Russia.

Books written by Iranian clerics such as Morteza Motahari, Abdolhossein Mousavi, and Ali Mohammad Naghavi are available in Russian cities like Kazan, Moscow and St. Petersburg. But none of these books offer information about Iranian critiques about Wahhabism.

Only one book on Wahhabism by Farez Askarzadeh, an Azerbaijan-based author, has been published. The book which is dubbed Dividing Sect was translated into Russian in 2001. Nonetheless, critiquing Wahhabism as an extremist ideology by Iranian clerics is conspicuously absent in Russia.

In a 2009 conference in Kazan, Seyyed Mohammad Reza Zarei, Iran’s second consul, delivered a speech on the problem of Wahhabism and said, “Lots of Islamic books which have been translated into Russian do not serve the interests of Russian Muslims at all and it’s necessary to have proper and authentic translations of Islamic sources. Also, special attention should be paid to the employment of staff members and instructors hired by Islamic training centers in Russia. The process of sending Russian students abroad to take religious courses should also come under scrutiny. In fact, Russian students must be stopped from ending up in training centers which promote fundamentalism and Wahhabism.”

At that gathering we learned that Iranian diplomats were in on what was going on among Russian Muslims and closely monitored what was happening in the Russian Islamic community.

It seems that there are a lot of opportunities for Iran and Russia to cooperate in the fight against Wahhabism.