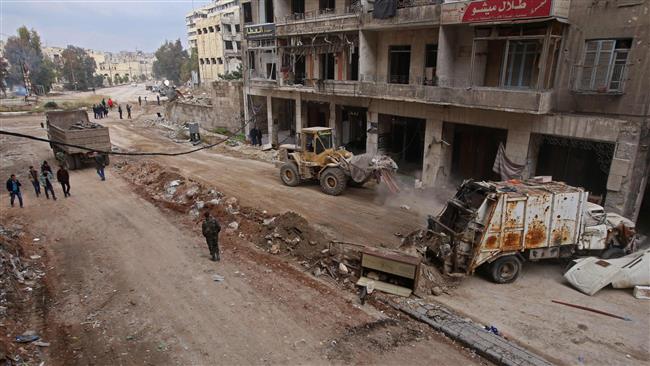 The defense ministers of Iran and Russia have stressed the importance of proceeding with a firm fight against terrorism in Syria, following the liberation of the strategic city of Aleppo from the foreign-backed militants.

In a telephone conversation on Saturday, Iranian Defense Minister Brigadier General Hossein Dehqan and his Russian counterpart Sergei Shoigu discussed the latest developments in Syria, particularly after the liberation of Aleppo.

The two ministers emphasized that the Syrian town of Fua’a and the village of Kefraya, which are besieged by the terrorists, must be liberated at the earliest.

Dehqan and Shoigu also called for a firm and all-out battle against Takfiri terrorists in Syria until the full establishment of security in the war-stricken country.

The Iranian and Russian defense ministers underlined the need for constant consultations on the fight against Takfiri terrorists.

Russian Defense Ministry’s Center for Reconciliation in Syria said in a statement on Friday that the Syrian military had wrested full control of eastern Aleppo, scoring a major victory against terrorists in the strategic northwestern city.

It further noted that more than 9,500 people, including over 4,500 militants and 337 wounded, had been taken out of eastern Aleppo.

In a telephone conversation on Wednesday, Iranian President Hassan Rouhani congratulated his Syrian counterpart Bashar al-Assad on the liberation of Aleppo, saying the Islamic Republic feels duty-bound to support the “flag-bearers” of the fight against terrorism.

Rouhani said Aleppo’s liberation was an important step towards Syria’s ultimate victory over terrorism in the Arab country.

Meanwhile, a new deal has been reached between the Syrian government and the militants in the city of Aleppo to resume the evacuation of civilians and the remaining armed groups from the east of the city, after the original pact came to a halt.

The original deal was suspended after militants prevented residents from leaving the two militant-besieged villages of Fua’a and Kefraya despite an agreement reached the day before.