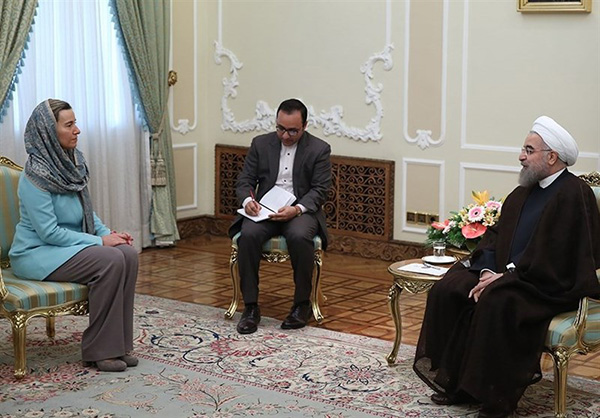 President Hassan Rouhani has reiterated Iran's stance that the crisis in Syria should be resolved through “political” means only.

“All should know that the Syrian issue has no military solution and must be resolved through diplomatic means,” Rouhani said in a meeting with EU foreign policy chief Federica Mogherini in Tehran on Saturday.

“In this regard,” the Iranian president said, “the EU’s increased activity to create security and peace in Syria with the cooperation of regional countries will be effective.”

Rouhani further said terrorist activities in Syria and Iraq pose a threat to the whole world, calling on the EU to use its “political influence” to put pressure on the regional sponsors of terrorist groups and block financial support for them.

He warned that the Middle East region and North Africa will in the future witness the establishment of several terrorist governments “if the terrorists are not seriously confronted.”

President Rouhani further said fighting terrorism and safeguarding the territorial integrity and sovereignty of Syria is important to the Islamic Republic.

Mogherini, for her part, underlined the need for cooperation between Tehran and the EU in the settlement of regional conflicts, including in Syria, saying that diplomacy can help solve such crises.

Earlier Saturday, Mogherini met with Iranian Foreign Minister Mohammad Javad Zarif to discuss bilateral ties between Tehran and the EU as well as the latest developments in Syria.

Zarif hailed EU’s “constructive” role in the Syrian peace process and expressed the Islamic Republic’s readiness to forge closer relations with the bloc.

Mogherini arrived in Tehran on Friday night to hold talks with senior Iranian officials about the ongoing crisis in Syria.

Mogherini’s trip to Tehran comes after Iran’s foreign minister participated in a day-long trilateral meeting with his Russian and Syrian counterparts, Sergei Lavrov and Walid al-Muallem, in Moscow on Friday.

Zarif said the three countries should reinforce cooperation in the campaign against terrorism. He called for measures to stop the delivery of military equipment to foreign-backed Takfiri militants wreaking havoc in Syria.

Since March 2011, Syria has been gripped by a militancy that it blames on some Western states and their regional allies, particularly Saudi Arabia.

Iran has been providing military advisory assistance to the Syrian government in its campaign against terrorism. Russia has been carrying out airstrikes against terrorist positions in Syria on a request from Damascus.