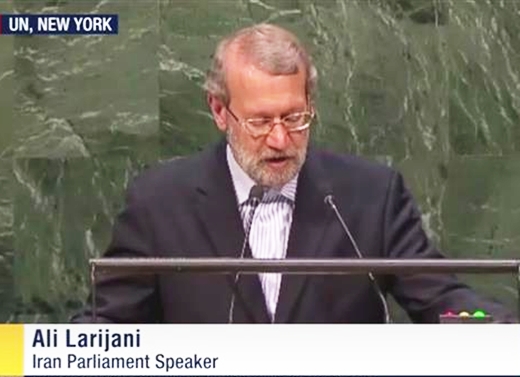 Some big powers tried to bring the Iranian nation to its knees, but the nation emerged victorious through steadfastness, Larijani told the Fourth World Conference of Parliament Speakers.

Parliament Speaker Ali Larijani has said that Iran has proven to the world that the weapon of force and bullying is no longer effective.

Larijani made the remarks in his address to the Fourth World Conference of Parliament Speakers, convened by the Geneva-based Inter-Parliamentary Union (IPU) in cooperation with the United Nations, at the UN headquarters in New York on Monday.

Some big powers tried to bring the Iranian nation to its knees, but the great Iranian nation stood against force by choosing the course of resistance and steadfastness and emerged victorious, he said.

By so doing, the Iranian nation showed that the weapon of force and bullying is old and ineffective and has lost its effectiveness and power of influence, the official added.

Larijani was referring to Iran’s recent agreement with P5+1which ended a 12-year Western standoff with Iran over the country’s nuclear program.

In today’s world, some powers still believe that they can attain their political goals by resorting to force, pressure and sanctions, he said.

He said some governments, which supposedly seek democracy for their own peoples, support dictatorship and despotic and violent regimes in some countries and seek to establish democracy in others via bombs and machine guns.

“The same approaches are the begetters of warmongering in today’s world. The painful fate of the downtrodden Palestinian people, the belligerency of the Zionist regime [of Israel], war and occupation in Iraq and Afghanistan, the war in Yemen, and the five-year-long war in Syria can be cited as examples,” Larijani said.