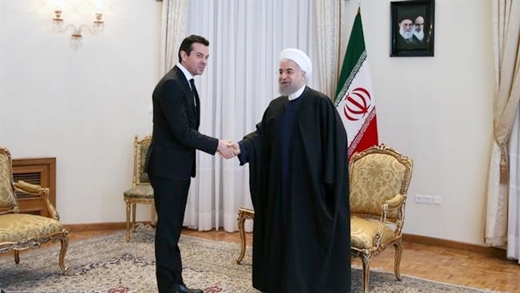 Iran’s President Hassan Rouhani says Tehran has valuable experience in fighting terrorism and is ready to transfer it to other countries.

Rouhani made the remarks in a meeting with visiting Macedonian Foreign Minister Nikola Poposki in Tehran on Monday Apr 25.

He said that some people try to attribute deviant views to Islam and push young Muslims toward terrorism and extremist activities.The Iranian president emphasized that measures should be taken to immunize the youth to extremist views.

Elsewhere in his remarks, the Iranian president highlighted the bilateral relations between Tehran and Skopje, saying that there is great potential for developing and deepening cooperation between the two sides.

“There are no obstacles in the way of developing all-out ties between Tehran and Skopje,” Rouhani stressed.

The Macedonian foreign minister, for his part, referred to the issue of terrorism and the necessity of fighting it, and said, “Unfortunately, Europe ignored this scourge (terrorism) for a long period.”

Poposki also called on all countries to coordinate in the battle against terrorism, which has created “a common concern for the international community.”

He also stressed that Macedonia is willing to strengthen its bilateral ties with Iran, and will open an embassy in Tehran in the near future.