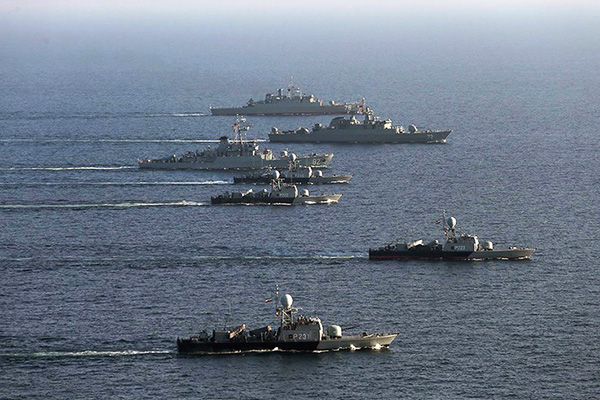 Speaking to reporters on the occasion of Army Day on Sunday, Admiral Sayyari said the one-day drill will be held in Bandar Abbas, a strategic port city on the Strait of Hormuz in the Persian Gulf.

Sayyari said the country’s naval forces are ready to deal with any foreign threat, adding that Iran will show its friendship to friendly countries in the region, and that “Our interaction with friendly countries will be doubled”.

The Pakistani military flotilla is already berthed at Bandar Abbas.

Meantime, ceremonies to mark Army Day in Iran began on Sunday morning with the participation of President Hassan Rouhani, who reviewed army units marching before him in the mausoleum of the Late Founder of the Islamic Republic Imam Khomeini, south of the capital.

Rouhani lauded the Armed Forces for increasing the country’s deterrence power, and reiterated Tehran’s preparedness to help the neighbouring and Muslim states to fight against the threat of terrorism and Zionism.

“I declare explicitly, as I did some days ago in the presence of Islamic countries’ leaders (at the Organization of Islamic Cooperation (OIC) summit in Turkey) that the military, political and economic power of the Islamic Republic of Iran is not [to be used] against our neighbours and Muslim states. We assume the power of Islamic countries as our power, and our power also belongs to the Muslim states,” Rouhani said, addressing the Army Day Parade.

“Also, I said there (at the OIC conference) if your (Islamic countries’) capitals are endangered by terrorism or Zionism, the Islamic Republic of Iran will be the only power which will give you a positive response, in case you need help,” he added.

Rouhani underscored that the Iranian Armed Forces’ power is not against its neighbours and has a defensive nature, adding that “our power means active deterrence”.

“Of course, we will cut off the hands of aggressors if facing aggression, but we have a logic of peace and brotherhood,” he stressed.

In a statement issued on Saturday, the Iranian Defense Ministry underlined that it would do its best to boost the country’s combat preparedness and deterrence power.

The statement which was issued on the eve of Army Day stated that the Armed Forces, particularly the Army, will spare no effort to continue to strengthen their defensive power in the face of future foreign threats and aggression.

It maintained that the Armed Forces are also ready to ensure national security and dishearten the enemies under the direct command of the Leader of Islamic Revolution, Ayatollah Seyed Ali Khamenei.