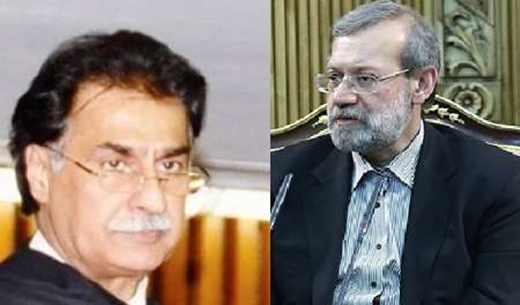 During the telephone conversation Larijani said Iran believes that Yemen's crisis should be resolved through national dialogue among all Yemeni political factions.

During a phone contact with his Pakistani counterpart on Saturday night, Larijani said Iran believes that the Yemen crisis should be resolved through national dialogue among all Yemeni political factions.

He praised Pakistan’s stance on Iran and the Muslim World, noting that Iran will use the nuclear agreement as a tool to boost regional stability and Muslim unity.

Destruction of Yemen’s infrastructure is in the interest of the Zionist regime and they should learn a lesson from Soviet and NATO aggression against Afghanistan, Larijani said.

He said Yemen’s crisis should be resolved through dialogue and military interference will only complicate the situation.

Speaker of the Pakistani parliament, for his part, welcomed the nuclear agreement between Iran and G5+1.

He voiced hope for removal of all sanctions against Iran.

The official said that Islamabad has no intention to interfere in the Yemen crisis and believes that peace in Yemen is the best interest of the whole Muslim world.

Saudi Arabia has been striking Yemen for ten days now to restore power to fugitive President Mansour Hadi, a close ally of Riyadh. The Saudi-led aggression has killed at least 860 Yemenis, including hundreds of women and children.
[…]