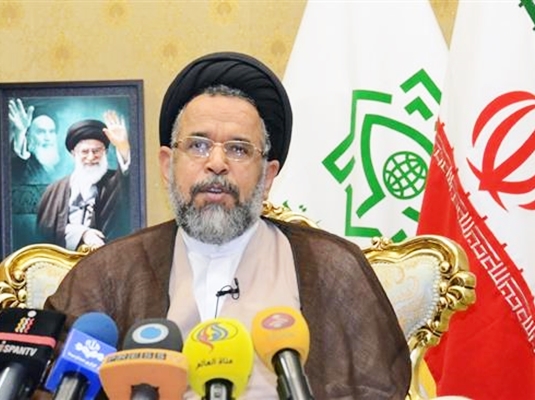 “The enemy is attempting to create an insecure environment through [causing] divisions between the Shias and Sunnis and among the society’s various spectra,” he said, speaking in the central city of Delijan on Sunday.

“All of these ploys have, however, been discovered,” the Iranian minister added.

Alavi said the intelligence command possessed and practiced by Iranian security forces has led to “unparalleled security in Iran.”

He said such security has been established even as Iran’s enemies are constantly seeking to harm the country.

Secure… and beckoning for businesses

“Today, hand-made explosives are entering the homeland from its east and west,” Alavi said, adding that Iranian intelligence forces have, however, been discovering all such attempts to smuggle explosives and they have been the ones “to pull the trigger” first.

The Iranian intelligence minister said such an atmosphere of “constant security” in Iran, which is located in a region bedeviled by wars and conflicts, has contributed to the willingness of foreign investors to bring their money into Iran.

“Insecurity in the region has prompted many investors to take part in economic cooperation in Iran, and this is the result of the strong security regime in the country,” he said.

Iran has been successful in protecting itself from the spillover of terrorism and conflict — constant features of life in a number of regional countries — due to high vigilance by its intelligence and security forces.

On October 4, Brigadier General Mohammad Pakpour, the commander of the Ground Forces of the Islamic Revolution Guards Corps (IRGC), said a terrorist group, backed by the United States and the Israeli regime, had been dismantled in the country’s west near the border with Iraq, with Iranian forces killing all of its members.