Iranian President Hassan Rouhani says the Islamic Republic can facilitate the access of Georgia and other regional countries to the Persian Gulf, the Sea of Oman and the Indian Ocean while Georgia can connect Iran to the Black Sea.

“Transit [cooperation] in the region currently has special significance and given a rail link between Iran’s [northern city of] Astara and Azerbaijan and good rail and road routes in Georgia, the development of Tehran-Tbilisi cooperation in this field can bring about a transportation in the region,” Rouhani said in a meeting with Georgian Prime Minister Giorgi Kvirikashvili in Tehran on Saturday.

He added that the two countries enjoy deep-rooted and cordial relations and noted that Tehran welcomes further expansion of ties with Tbilisi in all fields.

“Iran and Georgia have broad economic, scientific and cultural capacities and capabilities to strengthen their cooperation but these capabilities have not been utilized well and this trip can lay the appropriate ground for the expansion of mutual relations,” the Iranian president said.

He also urged the two countries to support investors in the private sectors to boost their cooperation.

Rouhani further highlighted the importance of interaction between Iran and Georgia on regional issues, saying, “Today, the region is faced with a big problem named terrorism and we must boost our cooperation to counter and uproot it.”

The Georgian prime minister, for his part, said his country is determined to connect the Persian Gulf to the Black Sea through Iran’s roads and railways.

He urged the two countries to strengthen cooperation in the transit of goods and transportation.

Kvirikashvili said Tehran and Tbilisi have been expanding political, economic and trade relations over the recent years and called on the two sides to make use of their capacities to further develop their cooperation, Press TV reported.

Kvirikashvili and Iranian Vice President Es’haq Jahangiri oversaw the signing of the memoranda of understanding (MoUs) on sports and agriculture as well as communications and information technology.

Additionally, Masoumeh Ebtekar, head of Iran’s Department of the Environment, and her Georgian counterpart put their signatures on a joint statement by the organizations under their watch.

Two other MoUs were also inked between the two countries’ private sectors on setting up a refinery complex and a factory meant to produce ceramic and tiles in Georgia.

In a press conference with the Georgian prime minister, the Iranian vice president said the two nations have a wide range of commonalities and enjoy a common stance on many regional and international issues.

“There is fertile ground for boosting economic, political and cultural cooperation between the two countries,” Jahangiri said.

He further underlined the importance of a multi-national transit project, called the International North-South Transport Corridor (INSTC), which connects the Persian Gulf to the Black Sea.

The official also expressed hope that active banking ties between the two countries will work to facilitate bilateral trade.

“The government and high-ranking officials of the two countries have a political will to develop relations in all dimensions without any restrictions,” he added.

The premier’s trip to Tehran came few days after Iranian Foreign Minister Mohammad Javad Zarif visited Georgia on the second leg of a three-nation tour of Central Asia and the Caucasus countries which also took him to Turkmenistan and Kyrgyzstan.

Speaking at a meeting on Iran-Georgia economy in Tbilisi on April 18, Zarif stressed the importance of launching a new transport corridor connecting the Persian Gulf to the Black Sea and said it would strengthen relations among regional countries.

“If implemented, the corridor connecting the Persian Gulf to the Black Sea is an opportunity which will bring regional countries closer to each other and decrease transportation costs of commodities,” the Iranian foreign minister said. 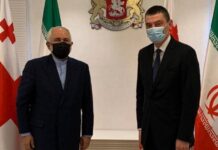 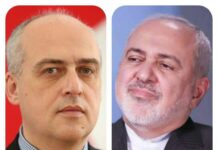 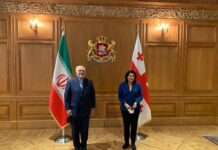 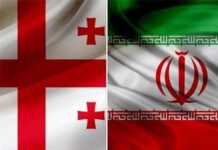 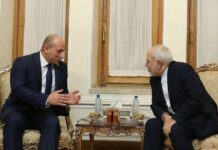