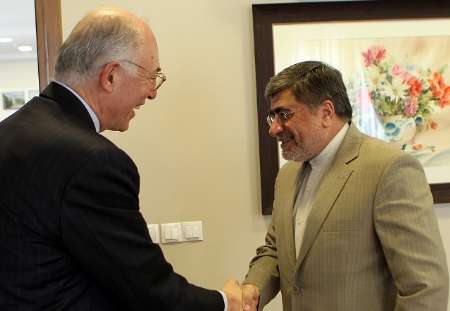 Jannati said that the Islamic Republic of Iran is willing to develop tourism cooperation with Greece.

He said that Iran and Greece enjoy longstanding political and cultural relations and have signed cultural contracts as far back as 60 years ago.

Jannati said that under the contract, the two countries had to hold cultural events at least every two years, but, the contract is currently not implemented.

He said that many Greek philosophers have inspired philosophy in Iran and that Tehran and Athens have developed traditional understanding in light of philosophy, the common interest of the Iranian and Greek scholars.

Jannati said that the Islamic Republic of Iran is willing to develop tourism cooperation with Greece.

Jannati said that the international peace and security has been subject to the threat posed by extremism which in some cases hides behind Islam and that any campaign against such danger and the deviated thoughts needs international cooperation.

Greece ambassador Giorgos Ginatis said that Iran and Greece have influenced the international community and the new culture minister of Greece intends to expand cultural ties with the other states.

The ambassador condemned extremism and barbaric acts of IS terrorist group.

He added that religion and faith are instruments to bring the human communities closer to each other, not for creating a wall of mistrust between nations.