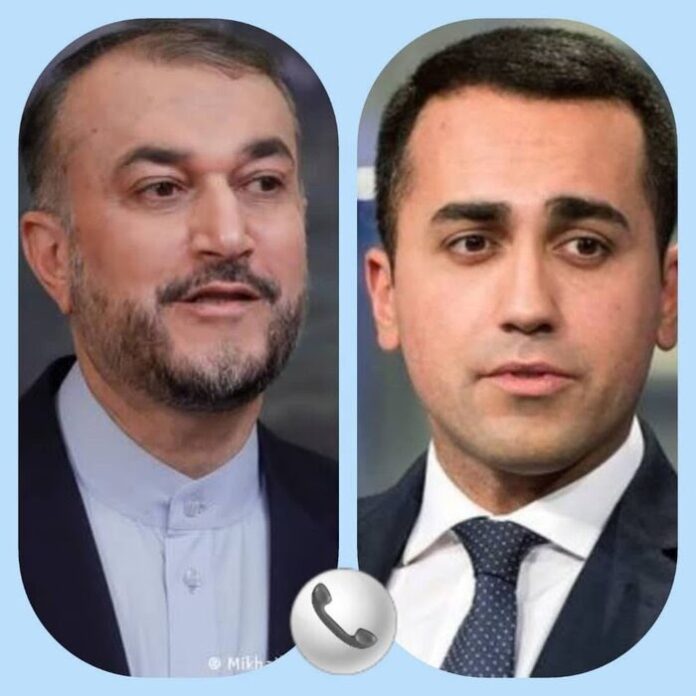 The Iranian foreign minister says all parties to the Iran nuclear deal have reached a common understanding that the United States is the main culprit behind the current situation in the nuclear deal.

Hossein Amir Abdollahian has held talks over the phone with his Italian counterpart Luigi Di Maio over the state of bilateral ties between Tehran and Rome and also regional and international developments.

Amir Abdollahian described the 160-year-old diplomatic relations between Iran and Italy as a good support for the growing development of ties in various political, economic and cultural areas.

He said the new Iranian government is determined to further develop its cooperation with friendly countries, including Italy based on mutual respect and by reliance on the capacities and opportunities of the relationships.

Amir Abdollahian said he is pleased that the condition is ripe for cooperation between Iran and Italy, especially in the fields of industry, agriculture, medicine, science and technology, and the like.

He described the Tehran-Rome ties as age-old, underlining on the need to maintain and strengthen them. Iranian foreign minister further termed the sending of vaccine in the form of COVAX to Iran as one of the significant points in the friendly cooperation between Iran and Italy.

Referring to the upcoming Vienna talk, Dr. Amir Abdollahian stressed that all parties have reached a common understanding that the United States is the main culprit behind the current situation. He added that some parties have acted irresponsibly by remaining silent toward US extravagance and are partly to blame for the current unacceptable situation.

On Afghanistan, Amir Abdollahian reaffirmed the Islamic Republic of Iran’s backing for the establishment of an inclusive government in the country. He noted that the illegitimate presence and catastrophic exit of the United States exacerbated the crisis in Afghanistan and its negative impact on the humanitarian situation there triggered a refugee influx, especially into Iran.

He said Iran currently hosts about four million Afghans, so it is imperative that responsible international organizations fulfill their responsibilities to address the situation of these displaced people.

Amir Abdollahian also stressed that Tehran is ready to use its facilities to transfer international aid and supplies from other countries, including Italy, to Afghanistan.

He also outlined the dire humanitarian situation in Yemen and called for increased diplomatic efforts to end the war and siege on Yemen.

The Italian Foreign Minister for his part emphasized Rome’s determination to further expand bilateral relations with Iran. He expressed satisfaction with the positive trend in the ongoing efforts for the upcoming talks in Vienna, and said he is hopeful that this process will lead to favorable results so that “we will witness further expansion of trade relations between Iran and Italy”. During the telephone conversation, Luigi Di Maioalso expressed his views over some bilateral and regional issues.

At the end of the conversation, the two foreign ministers invited each other to visit their respective capital cities and underlined the necessity of continuing their consultations.