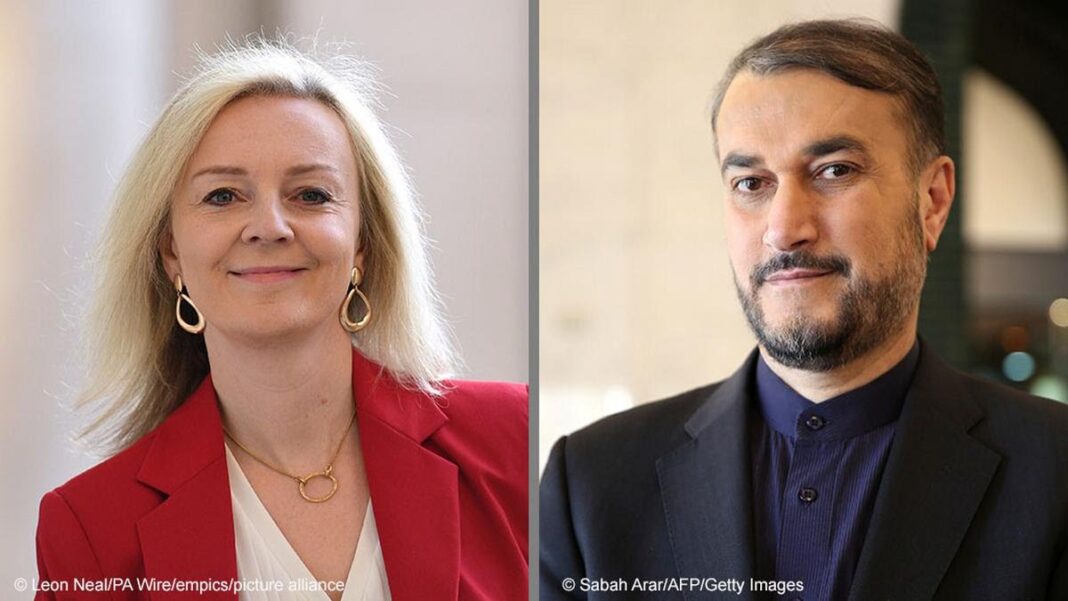 The Iranian foreign minister, in a phone conversation with his British counterpart, has reiterated the success of the Vienna talks over the Iran nuclear deal is contingent on the removal of all anti-Tehran sanctions and the return of all sides to their obligations under the deal.

Hossein Amir Abdollahian also said the US is to blame for the disarray surrounding the Joint Comprehensive Plan of Action (JCPOA).

Iran’s Foreign Minister Hossein Amir Abdollahian and his British counterpart Liz Truss held negotiations on Monday over bilateral ties, the Vienna talks and some regional issues on the phone.

Amir Abdollahian said the bulk of trade agreements between Tehran and London following the 2015 nuclear deal were not put into practice. He said that increasing trade and facilitating financial ties call for a more active role by London.

The foreign minister also referred to Britain’s old debt to Iran, saying the Iranian people have a right to the repayment of the debt. Amir Abdollahian added that the UK must take immediate action to repay its debt as soon as possible.

He referred to the state of the Iran nuclear deal, blaming the disarray on the US. He reiterated that some other signatories to the deal are also at fault over the current situation due to their irresponsibility and silence toward Washington’s actions.

The Iranian foreign minister said the Vienna talks’ success is contingent on the removal of all  sanctions, the return of all sides to their obligations, giving necessary assurances about the implementation of all talks’ results, and verification of actions by the other sides.

Amir Abdollahian added that normalizing trade ties with Iran was one of the commitments made by the other sides under the nuclear deal. He said the promise must be honored in the Vienna talks.

The British foreign secretary also wished fast recovery from Covid for Amir Abdollahian. She expressed pleasure over setting a date to hold the nuclear deal’s joint commission. Liz Truss said the European troika is serious and eager about making progress in the Vienna talks.

The need for sending international humanitarian aid for the people of Afghanistan, the significance of the formation of an inclusive government in Afghanistan, the catastrophic humanitarian situation in Yemen and the need to end the siege on the country, the importance of supporting Lebanon’s stability were other topics Amir Abdollahian and Truss covered in their telephone conversation. They two top diplomats also expressed regret over the continued human rights abuse in Bahrain.