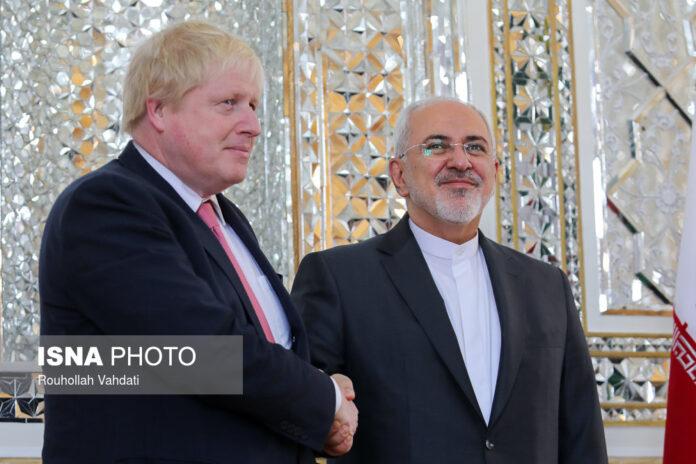 Iranian Foreign Minister Mohammad Javad Zarif has offered congratulations to Boris Johnson, the new prime minister of the United Kingdom, assuring him that the Islamic Republic is not after confrontation with London, but will protect its territorial waters.

“I congratulate my former counterpart, Boris Johnson on becoming UK PM,” Zarif tweeted on Tuesday, shortly after the UK’s Conservative Party elected Johnson as its new leader and the future premier of the UK.

Zarif pointed to the seizure of an Iranian oil tanker during the tenure of former UK Prime Minister Theresa May, and described it as “piracy, pure and simple”.

“Iran does not seek confrontation. But we have 1500 miles of Persian Gulf coastline. These are our waters & we will protect them,” he added.

The May govt's seizure of Iranian oil at behest of US is piracy, pure & simple.

I congratulate my former counterpart, @BorisJohnson on becoming UK PM.

Iran does not seek confrontation. But we have 1500 miles of Persian Gulf coastline.These are our waters & we will protect them pic.twitter.com/svEqmEHQBM

Earlier on Monday, Zarif issued a stern caution against any attempts at starting a conflict with the country, which is not seeking one, stressing that the Islamic Republic’s recent seizure of a British-flagged tanker did not come as an act of “retaliation.”

“Iran wants to have normal relations based on mutual respect,” he added.\

The top diplomat made the remarks after Britain issued Iran a volley of threatening messages in response to its Friday seizure of the UK-flagged. Stena Impero was captured and an investigation initiated after the tanker collided with an Iranian fishing boat in the Persian Gulf and refused to respond to its distress call.

British officials have minced no words in accusing Tehran of taking the measure in retaliation to British marines’ capture of an Iranian-operated supertanker in the Strait of Gibraltar on July 4. Iran says it only acted against Stena Impero after it flouted maritime regulations.

Zarif also described the UK’s seizure of the supertanker carrying Iran’s oil as “piracy” and “violation of international law” by British and Gibraltar authorities.

The British naval forces captured the vessel Grace 1 on the accusation that it was carrying Iranian oil to Syria in violation of the EU’s unilateral sanctions on the Arab country. Tehran has denied that the supertanker was bound for Syria.