Iran’s Foreign Ministry strongly condemned a terrorist attack on a convoy of buses carrying displaced civilians from Syria’s towns of Foua and Kefraya that killed dozens of people near Aleppo, mostly children.

Expressing condolences to the Syrian government and nation over the “bitter and brazen massacre”, Iran’s Foreign Ministry Spokesman Bahram Qassemi said the cowardly attack on the buses packed with residents of Foua and Kefraya that killed tens of children and women marked another dark point in the dirty record of terrorists and their supporters.

He also lashed out at the sponsors of terrorist groups for their selective approach towards crime and for dividing terrorists into good and bad, saying the overt and covert supports for the terrorist groups would encourage them to mastermind more heinous crimes, such as the Saturday attack near Aleppo.

Thousands of residents of the predominantly Shiite towns of Foua and Kefraya were evacuated on Friday under an exchange deal. They have been stranded at Ramouseh area on the outskirts of Aleppo, waiting for the buses carrying militants and civilians from Zabadani and Madaya to be transferred to the town of Jarabulus. 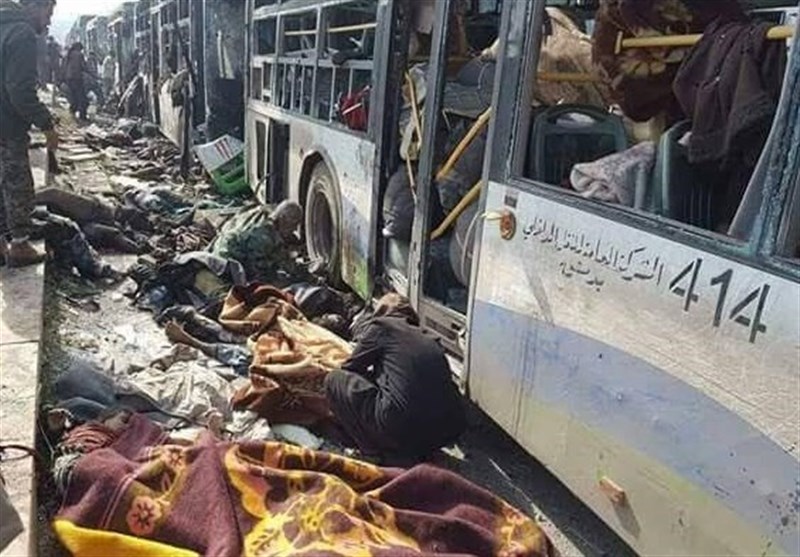 On Saturday evening, a bomber blew up an explosive-laden car near the convoy, killing nearly 40 people, mostly children.

Horror footage shows the buses engulfed in flames as people scream amid gunshots in the background.

Foua and Kefraya in the northwestern province of Idlib are encircled by Takfiri terrorists. The militant-held towns of Zabadani and Madaya near the Lebanese border are under siege by Syrian government forces.

Foua and Kefraya are the only government-held enclave in Idlib’s militant-held area.

The towns of some 20,000 people have been under siege since 2013. The humanitarian situation remains dire, with a lack of food and basic necessities.