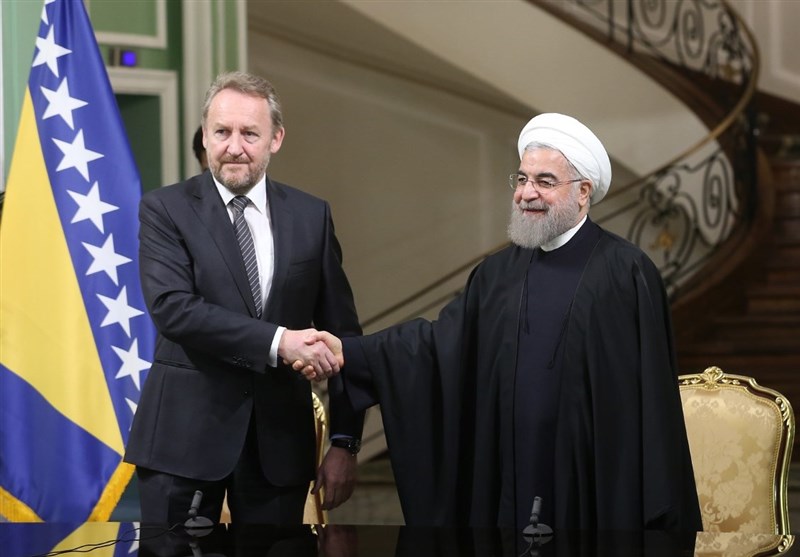 Iranian and Bosnian presidents unveiled plans on Tuesday for mutual cooperation in the fight against terrorism and extremism.

Speaking at a joint press conference with his Bosnian counterpart in Tehran on Tuesday, Iranian President Hassan Rouhani said high-ranking officials from the two countries have discussed joint action against terrorism and extremism, which are issues of mutual concern and pose a serious threat to the region and the world.

As regards cultural cooperation between Tehran and Sarajevo, the Iranian president said that promotion of Islam as the religion of moderation could be the basis of cultural interaction for Muslims in Europe. President of Bosnia and Herzegovina Bakir Izetbegovic, for his part, said the two countries have agreed to work together in countering terrorism and extremism.

Terrorists and extremists are tarnishing the image of Islam under the name of Islam, Izetbegovic deplored, calling for joint action to portray the real image of Islam, the religion of peace, stability and mercy.

Those trying to damage Islam with criminal and barbaric actions have nothing to do with this religion, he added.

Muslims comprise the single largest religious community in Bosnia and Herzegovina, accounting for 51 percent of its population of around 4 million.

Bosnia and Herzegovina is located in Southeastern Europe on the Balkan Peninsula.