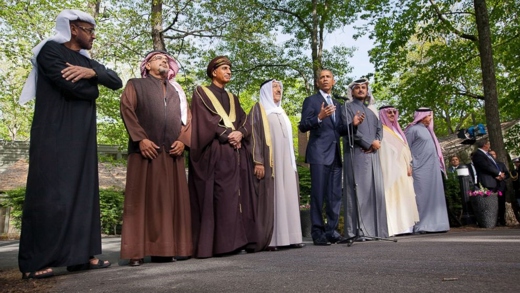 In an opinion piece, Sharq daily looks at the Camp David Summit and what dissatisfied Arabs managed to gain in the US presidential retreat.

A summit between the US president and leaders of the Persian Gulf Arab nations at Camp David wrapped up its work on May 15 by stressing the need to counter what the participants called Iran’s threat and destabilizing efforts in the region. To the disbelief of Washington’s Arab allies, the summit failed to produce concrete, satisfactory results.

That was the opening of an opinion piece – by Meysam Behravesh – Sharq daily published on May 18 about the summit earlier this month between President Barack Obama and members states of the Persian Gulf Cooperation Council and the upshot of the Camp David summit. The following is the translation of excerpts of the piece which was originally titled “Those discontented at Camp David”:

The expectations of the Arabs – to sign an official security pact with the United States – were not met at Camp David. Perhaps the knowledge about Washington’s reluctance to ink such a pact was one reason behind the decision by the leaders of Saudi Arabia, Bahrain and the UAE not to attend the summit [at the presidential retreat in Maryland].

The Obama administration refused to give the Arab countries present at the summit an MNNA status [Major non-NATO ally, which is a designation given by the United States government to close allies who have strategic working relationships with US Armed Forces, but are not members of the North Atlantic Treaty Organization (NATO)].

It is worth mentioning that Egypt, Israel, Jordan, Bahrain and Kuwait have been already declared major non-NATO allies by the US. Washington also declined to provide a nuclear umbrella [A protective status in which a nuclear state promises to use its arsenal to defend an ally without nuclear capabilities] for its Arab allies in the Middle East – similar to the US nuclear commitment to South Korea.

[The fact remains that] the US administration simply does not want to challenge Israel’s military and arms supremacy by lending military support to the Arabs or offering them a special security and defense status.

A case in point for such a mindset is the US unwillingness to sell its state-of-the-art, radar-evading F-35 fighters – which have been developed by Lockheed Martin [an American global aerospace, defense, security and advanced technology company with worldwide interests] – to the Arab nations in the Middle East. ​It is interesting to know that the US has already agreed to deliver the F-35 jets to Israel [so that Tel Aviv can maintain its military edge in the region].

Conceivably the US commitment to help the Arab states in the Persian Gulf build a joint defense shield in the region – to counter [what the Arabs call] a possible missile attacks from Iran – was the only tangible result of the 2015 Camp David Summit. For sure, there would be challenges in the way of carrying out such a [transnational] project.

As Anthony Cordesman – an American defense and intelligence expert at the Center for Strategic and International Studies (CSIS) and a national security analyst on a number of global conflicts – has put it, the main challenge to this joint project would be the conclusion of a comprehensive agreement among members of the Persian Gulf Cooperation Council (PGCC) over the rules and preparations which are needed to counter missile threats.

In light of the fact that the Arab nations are divided over certain security issues in the region, it would not be an easy task to have such an agreement inked.

In December 2014, Washington agreed to US companies selling defense equipment and arms to the PGCC – as an organization – like what Washington did in selling weapons to NATO and setting the stage for creating a joint air defense system.

Nonetheless, Israel is believed to be a bigger challenge. If the US seeks to help Israel maintain its military edge in the Middle East, the joint defense system should be designed and installed in a way that it can only intercept missile attacks from Iran and not those of Israel!

A look at the not-too-distant past shows that an undiplomatic [controversial] address in March 2015 by Israeli Prime Minister Benjamin Netanyahu to a joint meeting of the US Congress against Iran – together with his move to treat a national question as a personal issue he has with President Barack Obama – eventually tilted the balance in favor of a nuclear deal with Iran.

This is the second time over the past several months that the stance of Israel – which is a key US ally in the Middle East – ironically and unwittingly serves Iran’s interests.

For years, Israel had taken maximal advantage of Iran’ behavior to advance its strategic objectives. Now the tides have turned in Iran’s favor and this is – to a large extent – the direct result of the new [Iranian] government’s foreign policy which is based on wisdom and moderation.

The [Rouhani administration’s] foreign policy has seen the United States go as far as alienate its old allies in the region.