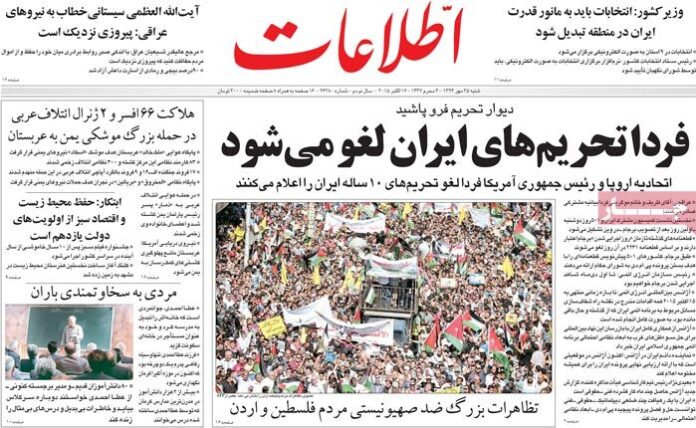 A special look at the headlines Ettela’at newspaper covered on October 17.

♦ The walls of sanctions will come tumbling down tomorrow.

♦ People in Jordan and Palestine have held massive anti-Zionist rallies.

♦ “Elections should turn into a maneuver to demonstrate Iran’s power in the region,” said the interior minister.

In another development, the head of the Electoral Commission said that the software to be used in electronic voting in nine provinces should secure the approval of the Guardian Council.

♦ Grand Ayatollah Ali al-Sistani has told the Iraqi forces that victory is imminent.

In another development, Iraqi forces wrested control of 90 percent of Baiji and Ramadi from IS terrorists.

♦ “Protecting the environment and introducing a green economy are among the priorities of the 11th government,” said the director of the Environment Protection Organization.

♦ A man as generous as rain

Ata Ahmadi is a real gentleman who turned the house he owned into a school and rented an apartment to live in.