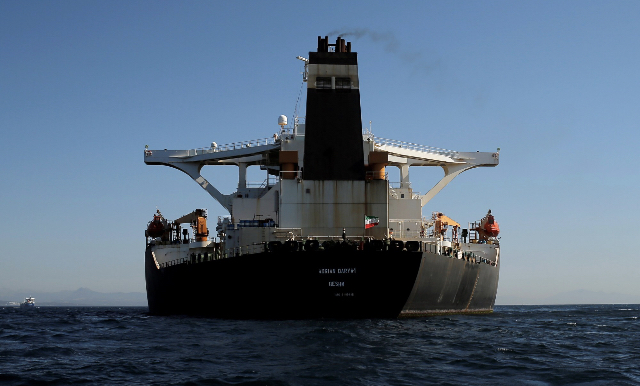 Nasrallah stated Hezbollah had spent more than $10 million on free and subsidized fuel from Iran for the Lebanese people throughout the first stage since September.

In a televised speech on latest developments, Nasrallah said $2.6 million worth of fuel had been provided for free to Lebanese NGOs, municipalities, government hospitals and other organizations, while more than $7.5 million had been sold at subsidized rates.

“During the first stage, we bore $10 million of diesel aid costs to alleviate the sufferings of Lebanese and address shortages in a crushing crisis,” Nasrallah explained.

He said a new Iranian oil vessel will reach Syria in the upcoming few days, indicating that “US pressures on the government urged us to import diesel via Syria despite difficulties.”

“We’re not planning to replace oil companies, all we want is to ease the oil crisis,” Nasrallah added.

However, Nasrallah announced that the second stage will start in the coming days and would be for families living in areas at 500m above sea level.

“We have so far imported 4 Iranian oil tankers, adopting a rather slow and complicated selling and distributing mechanism. This is normal since the verification process takes some time to ensure the diesel doesn’t go to black markets,” the Hezbollah leader said.

Nasrallah tackled in his speech the recent hike in Coronavirus cases, stating such rise in cases and fatalities was critical, offering help to the new Health Minister regardless of political affiliations.

“The world is witnessing an upsurge in Covid-19 cases and in Lebanon causalities are increasing. I call on the government and people to take this matter seriously and not underestimate it,” Nasrallah added, stressing the importance of abiding by all precautionary measures. He expressed Hezbollah’s readiness to offer any help needed amid this crisis.

Hezbollah leader called on the government to revisit its decision to cut medicine subsidies, stressing, “Lifting subsidies in such careless manner without any backup plan is extremely irresponsible.”

“Cuts could be applied to other unimportant things, medicine is an absolute priority to citizens,” Nasrallah said, adding that there are several sources of funding whether through debts, loans or cutting out on the budgets of other ministries and government institutions.

His eminence, hence, announced that Hezbollah decided to activate its institutions and medical clinics to secure the highest number of medicine citizens need.

Nasrallah decried the selectivity and politicization in the Beirut port blast probe as well as in the judiciary’s response to legal motions filed by the accused ex-PM and former ministers.

“All available data confirms that judges in charge of Beirut Port blast case are under accusation and suspicion,” Nasrallah noted, indicating that the course of judicial investigation into the Port Blast case is discretionary and won’t achieve any results.

“Is there a judge today in the Lebanese judiciary who dares to take a decision to dismiss the investigative judge (Tarek Bitar)? There is a judge (Habib Mezher) who moved in that direction, but they threatened him and fought him,” Nasrallah added.

“Continuing this course with Tayouneh case is alarming, and might drag the country into sedition,” he pointed out, saying, “The Military Court has come under very huge pressure from political and religious sides that are pressing for the release of the rest of the detainees. Even those lecturing us to resort to the judiciary refused to go to the judiciary and some of the fugitives are present in Maarab and are being protected there so that they don’t get arrested.”

“This is underestimating the martyrs, their families and all the parties they belong to, those who took part in the killings must be put on trial and continuing the current course is dangerous,” he went on to say.

Concerning latest documents circulated on social media alleging they’re issued by Hezbollah, Nasrallah said they were fake and the one who fabricated them was almost not Lebanese.

“Unfortunately, some dealt with these documents with a high level of absurdity, ignorance and triviality. This is an enormous war waged on Hezbollah,” Nasrallah deplored.

“There were even reports claiming we ordered some Shia brothers in Lebanon to marry from other districts to get more voters,” Nasrallah ridiculed.

He began his speech with the Independence Day controversy which he said should be settled, urging Lebanese to make it a genuine one.

“When Lebanon is abandoned from using its oil in such hard times, or remains under daily Israeli threats, then we are still in the heart of Independence battle,” he added, vowing that Hezbollah will “undoubtedly achieve an undebatable independence and stability to our country”.