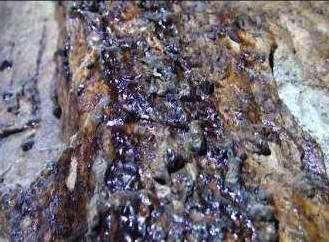 A cave has been discovered in Iran with a substance oozing out of its cracks and fractures. The substance is called Mummia and is said to have a lot of health benefits.

According to a report by IRNA, as translated by IFP, Mousa Dehghannezhad, head of the Environment Department of Saravan in southeastern Iran, announced that his team has found a substance called Mummia in a remote cave.

He said that there were a lot of rumours going around on the social media about the existence of an unknown animal in Kalehgan County.

“The rumours had caused panic among the indigenous people so we searched the entire area immediately.”

“The searching process took us two days but to no avail,” Dehghannezhad said

Instead, he added, “we discovered a cave with an entrance as high as two metres and as wide as 70cm. Inside the cave was 8 metres high and one metre wide.”

He noted that right from the beginning they noticed a strong smell in the cave. After further investigations, it came out to be from a substance named Mummia.

“All over the place, from ceiling to the walls, was covered with this miraculous substance,” Dehghannezhad stressed.

He went on to say, “Mummia is often found in remote, inaccessible areas; it oozes out from the fractures inside the caves where sunlight never reaches.”

Dehghannezhad added that the cave is located in the north of Kalehgan County in zero point border area.

Mummia is a blackish brown substance that leaks out spontaneously from the cracks and fractures found in the vicinity of underground oil reserves and high mountains.  It has many health benefits such as healing bone fractures, treatment of stomach ulcers, bruises and tendons, joint pain, cardiovascular disease and sexual dysfunction.

Animals, too, make use of this substance to heal injuries on their bodies.

Kalehgan County which is located 347 km southeast of Zahedan, the capital of Sistan and Baluchestan Province, is bordered with Pakistan.